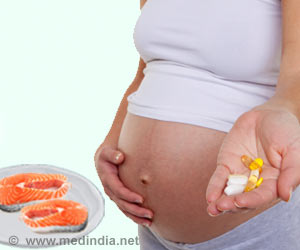 Nutritionists recommend pregnant mothers to consume fish, a rich source of docosahexaenoic acid (DHA), as it helps in providing nutrients important for optimal brain development. There however existed a concern whether this would lead to excess intake of mercury which is toxic to nerves. A recent research demonstrate that it is possible to promote consumption of fish that is low in mercury and high in DHA among pregnant women.

Fish and other seafood contain many healthy nutrients including lean protein, B-vitamins, vitamin D, iodine, selenium and long chain polyunsaturated fatty acids such as omega-3, that are essential for growth and development, especially in a pregnant mom and baby. Adequate intake of omega-3 PUFA, particularly docosahexaenoic acid (DHA), is essential for the development of brain and the nervous system in the fetus, and may also protect against other health adversities in both mother and child. The recommended amount of DHA for pregnant women is 200 mg /day, but surveys show that even 50 percent of women in the US don't consume the recommended amount.

And that may be because nearly all fish contain traces of mercury (methyl mercury). But some fish like shark, swordfish, king mackerel, or tilefish contain higher levels of mercury that may harm an unborn baby's developing nervous system.


The risks from mercury depend on the amount of fish eaten and the levels of mercury in the fish. Therefore, to reduce their exposure to the harmful effects of mercury, the Food and Drug Administration (FDA) and the Environmental Protection Agency (EPA) advise pregnant women to eat fish that are lower in mercury. Such fish and shellfish include shrimp, canned light tuna, salmon, pollock, and catfish. FDA also suggests eating up to 12 ounces (2 average meals) a week of a variety of fish that are lower in mercury.

Studies found that pregnant women consumed even less fish after these guidelines were disseminated. So, Emily Oken at Harvard Medical School, and her colleagues, conducted a study to find out how best to promote fish consumption during pregnancy without increasing mercury exposure.

Fifty five women who were 12 to 22 weeks pregnant and consumed equal to or less than 2 fish servings per month were divided into three groups. One group was given advice to consume low-mercury /high-DHA fish; the second group was given advice + grocery gift cards (GC); and the third one was the control group. At the start of the study and after 12 weeks, the researchers estimated intake of fish, DHA and mercury using a one-month fish intake food frequency questionnaire, and measured plasma DHA and total mercury.

DHA intake from supplements remained the same in all three groups.

'Some have been reluctant to encourage pregnant women to consume fish regularly because of concern that they may exceed recommended intake of mercury. In this pilot study, however, we demonstrated that it is possible to promote consumption of fish that is low in mercury and high in DHA among pregnant women who are infrequent fish consumers' says Emily Oken.

'Our study demonstrates that a nuanced public health message can be implemented to effect beneficial changes in diet, 'concluded the researchers. 'We have found that an intervention to increase fish consumption, when carefully directed toward fish with low mercury content, is feasible'.

Omega-3 Fatty Acids and CoQ10
CoQ10 is extremely important in helping neutralize free radicals; however it's most important function in this situation is to help create energy.
READ MORE