Written by Julia Samuel
Medically Reviewed by The Medindia Medical Review Team on December 9, 2016 at 2:53 PM 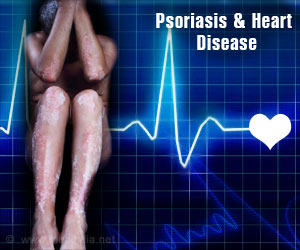 Psoriasis may increase the risk of heart disease as the effect of overactive immune cells in the skin can spread system-wide and inflame arteries, causing heart attacks and stroke.

Two new studies out of Case Western Reserve University School of Medicine describe how the inflammatory response to psoriasis can alter levels of several immune system molecules, ultimately increasing a person's risk of thrombosis, which can include fatal blood clots.

Psoriasis
Psoriasis is a recurrent and complex inflammatory skin disorder that can have tremendous physical and psychological impact on the sufferer
Advertisement
‘IL-23 and IL-17 mediate autoimmune responses in psoriasis and can be leveraged to improve psoriasis skin and reduce the risk of heart disease.’

Interleukin 6, or IL-6 is known for triggering overactive immune responses in the skin and patients with congestive heart failure also have high blood levels of IL-6.


"We wanted to pursue the mechanisms by which skin inflammation contributes to cardiovascular disease," said Nicole Ward, PhD, associate professor of dermatology at Case Western Reserve University School of Medicine. "In multiple mouse models, we showed removing IL-6 reduced cardiovascular risk, but did not get rid of psoriasis unless combined with other interventions."

Diet for Psoriasis
Learn what causes psoriasis, the appropriate diet to follow and the importance of diet in the treatment of this medical condition.
Advertisement
In psoriasis clinical trials, blocking IL-6 hasn't been successful. Trial results show IL-6 inhibitors don't reliably improve skin, and can even cause spontaneous psoriasis in people who didn't have it before. A protein called MRP14, which has been used to predict heart attack risk in certain populations was tested. People with autoimmune diseases like psoriasis have high levels of MRP14 in their blood, and the gene encoding MRP14 is located near psoriasis genes. The researchers deleted the gene encoding MRP14 in mice with psoriasis, hoping it would reduce thrombosis.

The MRP14-deficient psoriasis mice still had lots of IL-6 in their skin, plus two other pro-inflammatory molecules, called IL-23 and IL-17. Ward hypothesized that IL-23 and IL-17 could be part of a "workaround" mechanism in the mice that compensated for a lack of MRP14 and sustained skin inflammation.

"IL-23 and IL-17 are the targets for all the newest psoriasis drugs," said Ward. The two molecules have emerged as critical mediators of autoimmunity, and can be leveraged to improve psoriasis skin. When the researchers blocked these molecules in their genetically modified mice, skin inflammation and thrombosis disappeared. Not only that, IL-6 in the skin went down.

Ward said, "We discovered that blocking IL-23/IL-17 decreased skin-derived IL-6 in MRP14-deficient psoriasis mice and reversed the thrombosis." In another study Ward identified several immune system molecules impacted by the genetic deletion of IL-6 in her psoriasis mice. Said Ward, "We were surprised to see compensatory increases in other pro-inflammatory molecules that we know are critically involved in sustaining skin inflammation. It is possible that these factors also increase in psoriasis patient skin and explain why they do not respond clinically to IL-6 blockade."

Ward concluded that while blocking IL-6 may not prevent psoriasis on its own, its levels are central to thrombosis events triggered by skin inflammation. The findings may also help explain how alternative immune system molecules could circumvent certain psoriasis treatments.

Psoriasis Cure with Homeopathy: Fact or Fiction
Psoriasis, a chronic autoimmune skin disease has phases of exaggeration and remission. Homeopathic remedies are used to treat psoriasis and prevent its recurrence.

Scalp Psoriasis
Scalp psoriasis, a common skin disorder causes lesions on the scalp. There is no cure for scalp psoriasis and can recur after treatment.