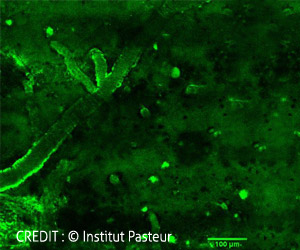 Markers of Alzheimer's disease that are located in the brain are difficult to access, thus hampering early diagnosis and timely management.

This is one of the major challenge faced by physicians treating Alzheimer's as it difficult to detect these markers early during the disease.

Genetics of Alzheimer´s disease
There are numerous genes that have been discovered that are associated with Alzheimer's disease and indicate increased risk, aiding genetic counseling and better care.
Advertisement
‘The variable region of llama antibodies could be used in conjunction with therapeutic molecules for targeted treatments in neuro-degeenrative conditions.’

Using two types of llama antibody capable of crossing the blood-brain barrier, have developed a non-invasive approach to reach brain cells in a mouse model of the disease.


Amyloid plaques and neurofibrillary tangles are the two types of cerebral lesions that characterize Alzheimer's disease.

Once in the brain, these llama antibodies can specifically mark and show these lesions.

Inability to Recognize Familiar Smells Could Signal Alzheimers
People who have difficulty recognizing familiar smells could be experiencing an early sign of Alzheimer's disease, according to a study published Monday.
Advertisement
Blood brain barrier generally protects the brain from microbial attacks but also prevents potential therapeutic molecules from reaching it.

Amyloid beta peptide , naturally present in the brain, builds up over the years as a result of genetic and environmental factors until it forms amyloid plaques.

This build-up is toxic for nerve cells. It leads to a loss of neuronal structure and to formation of "neurofibrillary" tangles (abnormal aggregation of the tau protein), which in turn results in cell death.

The researchers developed two new types of antibody capable of detecting the extracellular and intracellular targets (respectively amyloid plaques and neurofibrillary tangles) that are characteristic of Alzheimer's disease.

To achieve this, they turned their attention to camelids, specifically llamas, since their small antibodies are easy to use.

They used the variable region of the llama antibody, known as VHH or nanobodiesTM, to specifically recognize the markers of Alzheimer's.

The research led to the development of anti-Amyloid beta peptides and anti-tau protein antibodies that specifically detect amyloid plaques and neurofibrillary tangles.

These antibodies were subsequently tested in vitro on the brain tissue of Alzheimer's patients.

The antibodies were then tested in vivo in two mouse models, each with one of the two characteristic lesions associated with Alzheimer's disease.

These antibodies, were injected intravenously and crossed the blood-brain barrier, binding to the two targets the scientists were aiming to identify: amyloid plaques and neurofibrillary tangles.

This made the signs of the disease visible in the brain using two-photon microscopy. "Being able to diagnose Alzheimer's at an early stage could enable us to test treatments before the emergence of symptoms, something we were previously unable to do," explained Pierre Lafaye.

These VHH antibodies could be used in combination with therapeutic molecules so that the molecules can be delivered in a targeted way to the brain.

These results were published in the Journal of Controlled Release in October 2016.

The study team was led by Pierre Lafaye, Head of the Antibody Engineering Platform in the Citech at the Institut Pasteur, in collaboration with the Chemistry of Biomolecules and Integrative Neurobiology of Cholinergic Systems Units from the Institut Pasteur and the CNRS.

In the long term this could be applied to humans.

Drug Interaction Checker Find a Hospital Blood Donation - Recipients A-Z Drug Brands in India Daily Calorie Requirements Loram (2 mg) (Lorazepam) Accident and Trauma Care Drug Side Effects Calculator The Essence of Yoga Find a Doctor
This site uses cookies to deliver our services. By using our site, you acknowledge that you have read and understand our Cookie Policy, Privacy Policy, and our Terms of Use