A migraine is a severe headache that is triggered by a number of factors, but when the threshold level for these triggers is breached, they lead to migraines. Recent research by Jonathan M. Borkum titled " Migraine Triggers And Oxidative Stress: a Narrative Review And Synthesis" found that these triggers lead to an increase in oxidative stress, which was a common pathway that resulted in symptoms of a migraine.

Laboratory investigations found that a single trigger may not be sufficient to trigger a migraine as effectively as multiple triggers that occur in succession. This was the indication that there was a common pathway that leads to the development of migraine.


Observation 1: Migraine triggers constrict blood vessels and dilate them, affecting peripheral nociceptors or resulting in the activation of a hyperexcitable cortex.


‘Including antioxidant rich foods in the diet can counteract the effects of migraine triggers in the brain.’


Observation 2: Migraine triggers like hypoxia, alcohol, extreme heat or cold or hypoglycemia could affect the brain when in large amounts.

A molecule is said to be oxidized when it loses a hydrogen atom and becomes highly reactive, it is capable of oxidizing any molecule that it encounters. The brain has a certain amount of oxidants, and when the amount increases, it can become toxic by triggering neurological inflammation through ion channels.

The various known triggers for migraines are:


High concentration of alcohol leads to the activation of microglia, which increases the concentration, and the production of reactive oxygen species.

All these migraine triggers lead to the production of reactive oxygen species through any one of the following mechanisms:
This study offers hope for people suffering from migraine as the use of antioxidants can counteract the presence of superoxide anions that affect the neurons in the brain. Though a certain amount of programmed cell death is necessary to remove aged and dysfunctional cells, it proves costly in terms of neurons as they cannot be regenerated.

Migraine Facts
Migraine felt often as severe headache is the most common neurological condition. It is as powerful as troublesome as diabetes, epilepsy and asthma. Read Medindia's facts on migraine.
READ MORE 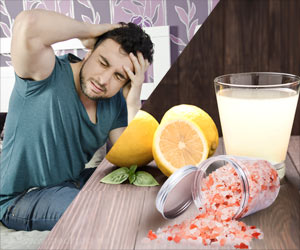 Got Migraine Headache? Lemon Juice and Sea Salt can Help Within Minutes
Dehydration amongst others is a potential trigger for a migraine, so can a simple solution of sea salt and lemon juice cure migraine headache?
READ MORE

Headache / Cephalgia
A headache literally means pain in the head. It is a common complaint that may occur frequently in some
READ MORE