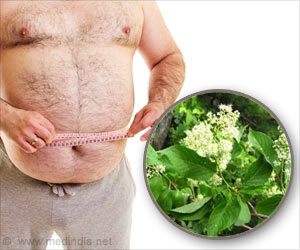 Celastrol, a compound found in the Chinese herb Tripterygium Wilfordi (thunder god vine) has been found to be effective in reducing weight in obese mice. However, it is still a long way off before it can be used in humans for the same purpose.

Obesity is an epidemic that plagues the world. It is a consequence of today's lifestyle of fast foods and desk jobs, though genes may also be responsible. Obesity is linked to several other diseases like heart disease, diabetes, fatty liver, stroke, and arthritis to name a few. Some drugs that were used for the treatment of obesity like sibutramine have been withdrawn due to side effects.


Bariatric surgery, where the size of the stomach is reduced by surgery, has shown to be beneficial in patients with obesity but has operative morbidity and its own risks.


Leptin has been one of the main focuses in the discovery of drugs for obesity. Leptin is an appetite-suppressing hormone that is secreted by the fat cells and inhibits hunger. It informs the brain that the body has enough fat stores and therefore the person does not have to eat immediately. People with obesity suffer from leptin resistance. Here, the brain is insensitive to leptin and does not react to signals from leptin, and therefore the patient tends to eat more despite having enough reserves. This results in obesity.

In their search for effective anti-obesity drugs, researchers investigated the effect of celastrol, which is obtained from a herb used in Chinese medicine, on obese mice. The result of the study was published in the journal - Cell.

The researchers found that celastrol reduced food intake, blocked reduction of energy expenditure, and caused up to 45% weight loss in the obese mice. This effect was seen in mice with high leptin levels, which indicates that they had leptin resistance. This effect was not seen in those mice with low leptin levels or those that lacked leptin receptors (sites on the brain where the leptin acts). Thus, it was concluded that celastrol probably acts as a leptin sensitizer and could provide a lead to the development of a drug for the treatment of obesity.

However, the use of this molecule as an anti-obesity therapeutic agent is at the level of animal studies. Until and unless further studies are conducted in animals and humans and the safety and efficacy of the molecule is established, exercise and dieting remain the best options to get rid of excess fat.