Combination pills or polypills that lower blood pressure and cholesterol have better patient compliance and are effective in reducing heart attack or stroke in patients, particularly those living in remote areas with limited access to healthcare.

Persons in rural and community settings are not widely studied in clinical trials and innovative measures such as polypills and once daily dosing will help to reduce risk of heart attack and stroke in such populations.
All-in-One Pill can Cut Down Heart Disease Risk

The study was undertaken at the Vanderbilt University Medical Center, Nashville, Tennessee and funded by the American Heart Association.


‘Persons given polypills are 25% lesser risk of developing a heart attack compared to persons given normal medications. Such novel measures can help reduce the risk of serious heart disease in persons with limited access to health care.’
Read More..


The findings of the study appear in the prestigious journal New England Journal of Medicine.


Improving Healthcare of Populations With Limited Access to Healthcare

The aim of the study was to find ways and means of improving heart health and reducing risk of serious events such as heart attack and stroke of populations living in rural communities and remote locations with limited access to healthcare.

"Patients face a variety of barriers to getting the care they need," says study author Daniel Muñoz, M.D, M.P.A., assistant professor of cardiology at Vanderbilt University Medical Center, Nashville, Tennessee. "Those barriers can include cost and complexity of medication regimens, so innovative strategies are needed to improve the delivery of preventive care, especially when it comes to socio-economically vulnerable individuals."

Testing the Efficacy of Polypills in Improving Heart Health

Thus, the findings of the study of the study suggest that polypills are effective in reducing heart disease risk in populations under-served with regards to healthcare facilities

Study offers simple and easy to implement measures to reduce heart attack or stroke poor and vulnerable populations. The efficacy of the polypill can also be studied in the general population.

In summary, combination pills or polypills containing four drugs in low doses is effective in lowering blood pressure and cholesterol and also patients are more adherent to their medications. Such simple measures will ensure optimal health of rural and other populations with poor healthcare access.

Top 10 Tips to Lower Your Blood Pressure
High blood pressure is the leading risk factor for cardiovascular disease. But it can be lowered naturally by simple lifestyle changes.
READ MORE 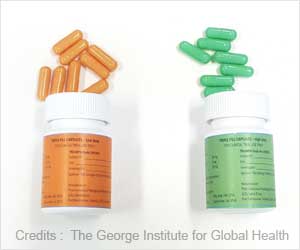 Blood Pressure Brought Down by a Triple Pill Combination
Blood pressure targets are reached in more number of patients who take a combination pill that contains half doses of three blood-pressure-lowering drugs than compared to people receiving the usual care.
READ MORE