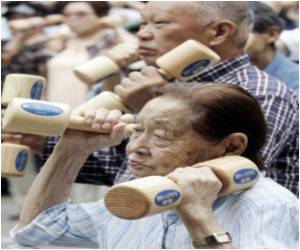 Moderate physical exercise for one year can increase the size of brain's hippocampus in adults aged 55 and more. This increased physical activity leads to an improvement in spatial memory.

The hippocampus is a brain structure involved in all forms of memory formation.

The study -- conducted by researchers at the University of Pittsburgh, University of Illinois, Rice University, and Ohio State University -- appears in the January 31 issue of "Proceedings of the National Academy of Sciences."


"The results of our study are particularly interesting in that they suggest that even modest amounts of exercise by sedentary older adults can lead to substantial improvements in memory and brain health," said Art Kramer, director of the Beckman Institute at the University of Illinois and the senior author.

Ageing is referred to the accumulation of changes that brings a person closer to death.
Advertisement
"Such improvements have important implications for the health of our citizens and the expanding population of older adults worldwide."

For their project, scientists recruited 120 sedentary older people without dementia and randomly placed them in one of two groups -- those who began an exercise regimen of walking around a track for 40 minutes a day, three days a week, or those limited to stretching and toning exercises.

The results showed that the aerobic exercise group demonstrated an increase in volume of the left and right hippocampus of 2.12 percent and 1.97 percent, respectively.

The same regions of the brain in those who did stretching exercises decreased in volume by 1.40 and 1.43 percent, respectively.

"We think of the atrophy of the hippocampus in later life as almost inevitable," said Kirk Erickson, professor of psychology at the University of Pittsburgh and the paper's lead author. "But we've shown that even moderate exercise for one year can increase the size of that structure. The brain at that stage remains modifiable."