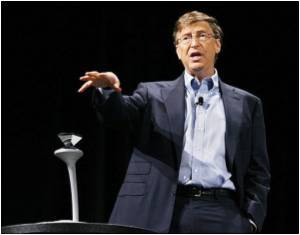 Microsoft co-founder turned philanthropist Bill Gates calls on donors to help him wipe out polio "once and for all" at an event on Monday.

"Eradication will take amazing work, and I truly believe we can succeed," he told a packed room at the house in New York where Franklin D. Roosevelt recovered after being stricken with polio at age 39, before he ran for and won his first term as US president.

"We have the science and the money, so let us pave the way for a future where children, no matter where they live, can face a future without the threat of polio," Gates said.


The world was "on the threshold of ending polio once and for all," but the effort faced "substantial financial challenges" as governments around the world cut aid spending as they tighten budgets, Gates said.

The disease was all but eradicated in developed nations decades ago, and is on the verge of becoming the second illness after smallpox to be wiped out, with just 946 cases of polio reported around the world last year.

But the potentially fatal disease, which usually affects children, remains endemic in four countries -- Afghanistan, India, Nigeria and Pakistan -- and recently resurfaced in southwest Africa, where there had been no cases since 2000.

"Eradicating polio is not something we can hesitate over now and say we'll get it done later," Gates said.

"If we stop the intense pressure we have put on polio in the last five years the virus will spread again."

"Polio is kind of like fire. You have to damp it down or it will flare up in places, like it has in Tajikistan or Congo. It's a terrible thing and that is why getting to zero is so important," Gates said.

Gates said the foundation he set up with his wife Melinda could fund 15 percent of the effort to wipe out polio, but called for a "renaissance" of awareness among ordinary people and world governments.

"We've got it way down, but the last one percent is very difficult," Gates said.

Wiping out polio would save the world up to $50 billion over the next 25 years and spare countless children from death or paralysis.

But two billion dollars are needed over the next two years to eradicate polio, and "there's a $720 million shortfall," Gates said.

"If eradication fails because of a lack of generosity on the part of donor countries, it would be tragic," added the billionaire philanthropist, whose foundation gives about $200 million a year to fight the disease.

In a tragic incident, a two-year old boy in Chennai died just hours after being given polio drops, causing a minor panic among parents of other children
Advertisement
<< Hospitals Directed to Prescribe Generic Drugs
Exercise Improves Memory in Older Adults >>

Hypermobility Syndrome
News Archive
News Resource
Advertisement
News Category
Milestone In Voluntary Blood Donation Achieved Samsung Reinvents Toilet for the Poor Which is a Better Form of Exercise: Daily or Weekly? First Phase of Foot-and-Mouth Disease Vaccination Shocking News: Polio Cases Return After a Decade in the US
More News
Sign up for Wellness Consult a Doctor Sign up for Selfcare

Diaphragmatic Hernia Drug Side Effects Calculator Noscaphene (Noscapine) Sanatogen How to Reduce School Bag Weight - Simple Tips Post-Nasal Drip Sinopril (2mg) (Lacidipine) Find a Hospital Blood Pressure Calculator Daily Calorie Requirements
This site uses cookies to deliver our services. By using our site, you acknowledge that you have read and understand our Cookie Policy, Privacy Policy, and our Terms of Use