Ebola Has Killed 61 in Guinea Since January: Report 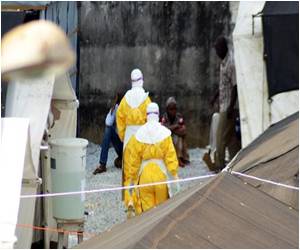 The government said the Ebola virus has claimed 61 lives in Guinea out of 109 laboratory-confirmed cases since January.

They were among 197 suspect cases recorded in the impoverished west African country.

"From now on, biological analysis can be done more quickly, and the toll will no longer include any non-confirmed cases," government spokesman Damantang Albert Camara said in a statement.


Gueckedou, a town in the south of the country which has suffered one of the largest outbreaks, has seen 34 deaths out of 58 confirmed cases. In the capital Conakry, with 36 confirmed cases, 15 people have died.
Advertisement
On Thursday the World Health Organization said there had been 101 laboratory-confirmed cases of Ebola in the former French colony, and 56 deaths. Some 24 health-care workers have contracted the virus, 13 of whom have died.

The virus has crossed into neighbouring Liberia, where the government has laboratory confirmation of six cases. The health ministry is investigating 27 cases of haemorrhagic fever, and 13 deaths, to establish whether the victims had contracted Ebola.

There is no vaccine or cure for Ebola, which can be caught from handling the blood or the bodily fluids of sick or dead forest animals.

The virus can easily spread among humans through contact with infected blood, bodily fluids and tissue, and can be stopped only by isolating suspected cases in ultra-clean conditions and quarantining those who have been in contact with them.

A study published this week in the New England Journal of Medicine said that the Guinea epidemic involves a new strain of the virus, which could possibly have been transmitted by fruit bats.

New Strain of Ebola Virus Circulating in Guinea
Virologists have revealed that the virus that has caused a deadly Ebola epidemic in Guinea is a new ...

Emergency Moves Against Ebola Onslaught in Guinea Unveiled by the WHO
A raft of emergency measures have been launched by the World Health Organization in the Guinean ......

Mali Clear of Deadly Ebola Epidemic
Mali reported on Tuesday it was clear of the Ebola epidemic, a disease suspected to be behind ......