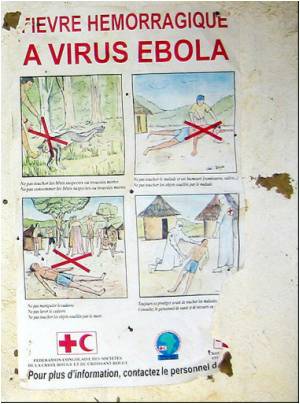 Airport officials told AFP today that Gambia has banned flights from Ebola-hit west African countries from landing in its territory.

Staff at Banjul International Airport said on condition of anonymity that President Yahya Jammeh had ordered airlines to cancel all flights from Guinea, Liberia and Sierra Leone in a bid to prevent the spread of the deadly virus.

Suspecting a passenger having a deadly Ebola by the crew, an Air France plane from Guinea was quarantined for two hours in Paris on Friday.
Advertisement

"This decision by the Gambian authorities has left prospective passengers travelling to Banjul ... stranded in these west African countries," said an airport official, speaking on condition of anonymity.


"Brussels Airlines, which transits in Freetown from Europe, is only allowed to drop passengers there, but not pick anyone up."

The outbreak in Guinea is one of the most deadly in history, with 168 cases "clinically compatible" with Ebola virus disease reported, including 108 deaths, since the start of the year, according to the World Health Organization.

Senegal Plans to Stop Ebola With a 'Well-Oiled System'

As the suspected death toll of Ebola cases in Guinea and Liberia rises to 111, Senegal vowed on Tuesday that it is prepared for any spread of the deadly virus.
Advertisement
The outbreak began in the impoverished country's southern forests, but has spread to Conakry, a sprawling port city on the Atlantic coast and home to two million people.

Mali also has suspected cases but does not appear to have been included in the ban, while Sierra Leone, which has no suspected cases, is on the list of outlawed countries.

There was no immediate official confirmation of the ban from the Gambia but an airport worker told AFP a letter dated April 10 enforcing the measures had been sent to airlines while Sierra Leone's government said it was in talks with Banjul over the issue.

Sierra Leone, where two suspected victims died and were buried before they could be tested, said it was not questioning the Gambia's right to take action but had no idea of the rationale behind the decision.

"The government of Sierra Leone is currently engaging the Gambian government on the issue and providing all details of the surveillance system put in effect against the disease," said government spokesman Abdulai Bayratay.

"We still have no confirmed laboratory test of any Ebola outbreak here and this has been certified by the WHO, working with our health teams.

"Sierra Leonean air passengers are travelling freely to Britain, Belgium and all over the world without hinderance."

Witnesses at Freetown's Lungi International Airport told AFP around 100 Sierra Leoneans, mostly traders, had been planning trips to the Gambia but had seen their flights cancelled.

"My business in now near ruin. I have accepted money from people planning for a wedding and I was due to return in few days time to deliver the goods but with the ban now on, I am in a jam," textile trader Alimamy Turay told AFP.

The Gambia, a country of about 1.8 million, is a finger of territory flanking the Gambia River, with Senegal on either side and a narrow Atlantic coastline.

Jammeh, 48, is often pilloried for taking unilateral and seemingly impetuous decisions as well as for rights abuses and the muzzling of the press.

In March, he said the former British colony would be dropping English as its official language and in 2008, he gave an ultimatum to gays and lesbians to leave his country, saying he would "cut off the head" of any homosexual found in the Gambia.

WHO Says West Africa Ebola Outbreak Among 'Most Chilling' Ever

West Africa's Ebola outbreak, suspected to have killed 111 as of now, is among the most chilling ever to strike since the disease emerged four decades ago, said WHO on Tuesday.
Advertisement
<< Better Understanding of Singlet Oxygen
Accessing GPs Gets Easier in UK: Opening Hours Extended, Do... >>

Sinopril (2mg) (Lacidipine) Diaphragmatic Hernia Find a Doctor Selfie Addiction Calculator Post-Nasal Drip Hearing Loss Calculator Indian Medical Journals The Essence of Yoga Blood Pressure Calculator Daily Calorie Requirements
This site uses cookies to deliver our services. By using our site, you acknowledge that you have read and understand our Cookie Policy, Privacy Policy, and our Terms of Use