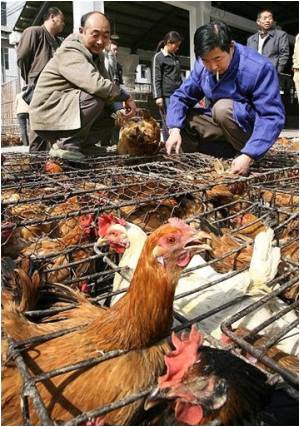 In Shanghai, the new bird flu strain has taken another victim, raising the toll to 11, say authorities.

The official agency Xinhua reported this latest death along with two new cases of the sickness in Shanghai, the metropolis most affected by the flu virus up to now, followed by the neighbouring provinces of Jiangsu, Zhejiang and Anhui.

Out of a total of 40 people affected up to now, only a four-year-old boy who suffered slight symptoms has recovered.


None of those who were in contact with the infected people are showing any symptoms and there is no evidence of person-to-person transmission of the illness, China's National Commission of Health and Family Planning said.
Advertisement
The World Health Organization also dismissed the possibility of an epidemic since, for the moment, no cases have been found of the virus being transmitted among humans.

Several clinical observations have shown that if the patient is treated within five days after showing the first symptoms, China's current therapeutic methods "can be effective".

Some in China question the government's delay in announcing infections with this new strain of flu, whose first case occurred March 1 but was not confirmed until the end of the month.

The health ministry, however, says the delay was due to the tests that allowed the virus to be identified.