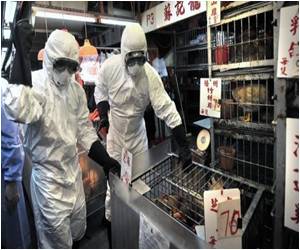 As authorities sought to control "panic" with cases mounting, China has detained at least 12 people for spreading false rumors about H7N9 bird flu, according to government statements.

China announced on March 31 that the H7N9 avian influenza had been found in humans for the first time. The number of people confirmed to have been infected rose to 31 on Wednesday, with nine deaths.

Police in China's southwest city of Guiyang detained three people for claiming H7N9 had been found in a poultry market, said a police statement released on Wednesday.


"This caused panic among netizens and citizens," it said.

The two who posted the original rumour were each being detained for five days, but one who spread it more widely over the Internet would be held for 10 days, the statement said.
Advertisement
The H7N9 outbreak has so far been confined to China's developed eastern region, including commercial hub Shanghai, where five people have died.

Police have also detained three people in Zhejiang province, two in Jiangsu and two in Anhui for spreading "false information" about bird flu, according to separate statements compiled by AFP.

The southeastern province of Fujian and Shaanxi in the north, which have yet to confirm human cases, have each detained one person for similar offences, police statements said.

The World Health Organization has praised China for its transparency towards the H7N9 outbreak.

But a Chinese newspaper on Wednesday raised questions on the delay of more than three weeks between the first victim's death and the announcement by the central government, claiming testing by Shanghai confirmed H7N9 a week after his demise.

"Would not infections and deaths be less (from an earlier announcement)?" the Southern Metropolis Daily said, linking the delay to the annual session of China's legislature.

"During that time... local governments could not afford to make mistakes," the newspaper said.

Chinese officials say time was needed to confirm the virus in people for the first time.

A decade ago, China also faced accusations it covered up the outbreak of Severe Acute Respiratory Syndrome (SARS), which killed about 800 people globally.