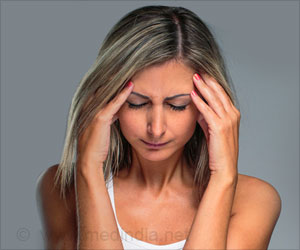 Changes in potassium channels involved in pain detection are more sensitive to temperature and touch stimuli on faces and cause headaches without body pain behaviors. This makes the defective potassium channel with such cell-specific roles, a target for migraine treatment research.

Defective potassium channels involved in pain detection can increase the chance of developing a headache and could be implicated in migraines, according to research in mice published in eNeuro.

Advertisement
‘Mutation in potassium channels that control neurons found in the body and face, senses only headaches and no body pain.’
Read More..

A type of potassium channel called TRESK is thought to control the excitability of peripheral sensory neurons that detect pain, heat, cold, and touch. Even though these channels are found throughout the neurons sensing both body and facial pain, channel mutations are linked only with headaches and not body pain.


Yu-Qing Cao and colleagues at Washington University in St. Louis analyzed a knock-out mouse with defective TRESK channels and measured the resulting neural activity. The researchers found that only facial pain receptors were more excitable, and that the sensory neurons had more spontaneous activity. Using behavioral tests, the scientists observed that the knock-out mice showed increased sensitivity to temperature and touch stimuli on their faces, as well as more headache-related behaviors, but no body pain behaviors.

These results indicate that TRESK channels have cell-specific roles and are responsible for regulating pain in facial sensory neurons, making them a target for migraine treatment research.

Migraine Headaches May Up Risk of Pregnancy Complications
Expecting mothers who suffer migraine headaches during pregnancy are more likely to have an ......

Early Puberty in Girls can Increase the Risk of Migraine Headaches
Teen girls who reach puberty at an earlier age may also have a higher chance of developing migraine ...

Bone Fracture may Lead to Chronic Body Pain Later in Life
The risk of chronic widespread body pain increased in the case where people reported of having a ......

Terror Survivors Experience Migraines and Other Headaches Daily
Terror attack survivors are at a high risk of developing migraines and other headaches such as ......

Migraine
Migraine is a chronic disorder characterized by headache, nausea, vomiting or sensitivity to light a...