Bioengineers Invent a New Way to Speed Up Drug Discovery 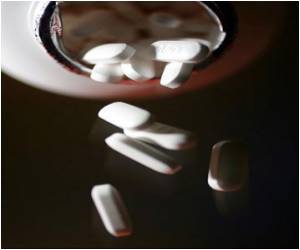 Imagine the human body as an intricate machine whose working parts are proteins: molecules that change shape to enable organs and tissues to perform tasks such as breathing or eating or thinking.

Of the millions of proteins, 500 in the kinase family are particularly important to drug discovery. Kinases are messengers: They deliver signals that regulate and orchestrate the actions of other proteins. Proper kinase activity maintains health. Irregular activity is linked to cancer and other diseases. For this reason many drugs seek either to boost or suppress kinase activity.

Now Stanford bioengineers have invented a way to observe and report on the behavior of these signaling proteins as they go about their crucial work inside living cells.


"We've been able to observe multiple kinases functioning in living cells, which is something no one else has ever seen," said Markus Covert, an assistant professor of bioengineering at Stanford and lead author of a paper published today (June 19th) in the journal Cell.
Advertisement
"Cancers can occur when a kinase inappropriately tells a cell to 'grow, grow, grow'," Covert noted. "The reverse can also be true, if a cell reaches what should be the end of its normal life-span but the kinase never says 'die, die, die'."

Using the new technique researchers could observe and compare kinase activity in healthy versus diseased cells - then introduce an experimental drug to see how the proposed remedy affects the living cell.

Prior to this, researchers would have had to pulverize a cell sample, extract the relevant kinase and measure its levels. If they designed a drug to treat the condition, they would have to administer the experimental remedy to a different cell culture, then pulverize this sample and sift out the data on kinase activity.

The new Stanford technique enables researchers to read the activities of multiple in living cells, and if they administer an experimental drug, to observe any changes that result in that same cell sample

Covert believes this process will speed the development of new drugs aimed at cancers and other conditions linked to kinase irregularities. More than two dozen such drugs are on the market or in development today, from companies including Genentech, Amgen, Novartis, Roche and Takeda (see list).

Sergi Regot, a postdoctoral scholar in Covert's lab, spent more than a year developing and refining the process that he outlined as the first author of the Cell paper.

It all begins with a conceptual understanding of how kinase messenger proteins transmit signals.

Protein signaling is a complex cascade of physical events inside a cell. The protein itself is a long chain of atoms. Different groups of atoms in the chain perform different functions. Some atoms serve as the antenna or receiver that directs the kinase to a specific location. Upon arriving at its destination, the kinase delivers its message, instructing the protein to do something inside the cell.

So the kinase essentially has two parts: One part finds the address inside the cell, and the other part delivers the message.

To track the activity of this signaling system in living cells, Regot came up with the idea of creating a fake destination for the kinase. He called this decoy a Kinase Translocation Reporter (KTR). He tagged the KTRs with a fluorescent protein so he could track their locations inside the cell with special microscopy tools. He added one other crucial element to the KTR: a molecular switch that indicated whether the kinase was active or inactive.

"All of this was easier thought of than accomplished, but in the end we did it," Regot said.

By tracking the intensity of the fluorescent KTRs the bioengineers could tell whether kinase was active or inactive. Kinases are important regulators of cellular activity. The Stanford technique allows researchers to see how specific levels of kinase activity either promote health or trigger disease inside a living cell.

Covert's team spent more than a year working on the technique. So far they have successfully applied the KTR approach to five kinases, and they believe that KTR technology could be extended to other kinases, to make it a widely available and useful tool in drug discovery.

"Imagine you wanted to discover a new drug," Covert said. "You could throw KTRs into a cell culture and observe kinase activity under different conditions."

Source: Eurekalert
Advertisement
<< 1 in 25 US Babies are Born too Soon
How Stress Leads to Heart Attacks Explained >>

Scientists Put An End to Animal Testing for Drug Discovery
Scientists are stepping in with a new way to test therapeutic drug candidates and determine drug ......

The Potential of Large-Scale Genetic Studies for Drug Discovery Discovered
Research shed light on the biology of the disease and provide evidence that large-scale genetic ......