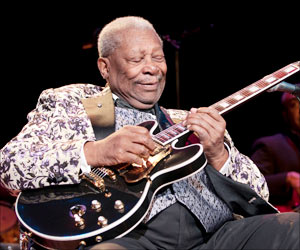 BB King, the famous American guitarist, blues musician, singer, songwriter was rushed to hospital with diabetes-related dehydration. The 89-year-old, considered one of the greatest guitarists of all time, was admitted to a hospital near Las Vegas.

Claudette, his daughter told that King has diabetes for the past 20 years and was suffering dehydration related to Type II diabetes. But now he is much better.

The King of Blues was inducted into the Rock and Roll Hall of Fame in 1987 and has spent more than 65 years on the road as a musician, playing more than 300 gigs a year at his peak and releasing an incredible 43 studio albums.


Last year, there were signs that his medical condition and age were catching up with him. He called off all the shows that he had previously agreed to perform. After his previous recovery, he said, "I'm back at home now listening to music, watching movies, and enjoying some down time. I think I'm busier at home now than on the road talking to friends calling to check up on me. I do appreciate everyone's calls and concern. I want to tell you, I'm doing alright."

Diet plays a significant role in controlling diabetes. Most cases of diabetes are preventable with healthy lifestyle changes.
Advertisement
Advertisement

Heat stroke is caused when body temperature or hyperthermia exceeds 40.6°C or 105.1°F. Heat stroke can be ...