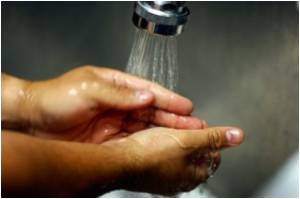 The antimicrobial copper could be effective in preventing the spread of antibiotic-resistant organisms, such as MRSA, in hospitals, it has been demonstrated.

A live experiment from a laboratory at the University of Southampton used state-of-the-art fluorescent microscopy to show copper eradicating an exceptionally high challenge of MRSA bacteria - one of the notorious antibiotic-resistant superbugs - within minutes.

Microbiologists and clinicians worldwide witnessed tens of thousands of MRSA bacteria perishing rapidly on copper, yet surviving on stainless steel: a material used commonly in hospitals, yet lacking any antimicrobial efficacy. Professor Bill Keevil, Director of Environmental Healthcare at the University of Southampton and leader of the experiment, explained the significance of the result: "Bacteria such as MRSA can survive on ordinary surfaces like door handles, taps and grab rails for days, even months, and be transferred on hands, spreading bacteria to other surfaces or to patients.


"As more resistant bacteria emerge, we're running out of drugs to treat the infections they cause, so we need to do everything practicable to prevent their spread. Copper is a powerful antimicrobial, which quickly and continuously reduces the number of bacteria on its surface. We've demonstrated it here, in the lab, and it's also been shown to be effective in busy clinical environments as part of a set of infection control procedures.

Drug resistance is often a problem in malaria, tuberculosis, HIV, sexually transmitted diseases and hospital acquired diseases. Judicious use of antibiotics can control the problem.
Advertisement
"Changing common touch surfaces in hospitals to copper can help break the chain of infection, leading to a more hygienic environment, which must have a positive impact on the well-being of patients, even in the face of antibiotic-resistant bacteria."

Approximately seven million people worldwide acquire a healthcare-associated infection (HAI) each year, and of the four million in Europe, around 37,000 die. In addition to the immeasurable personal toll, they cost over $80 billion globally, according to the World Health Organisation.

The highlights of the experiment,  and interviews with Professor Keevil and victims of MRSA can be watched  at http://www.antimicrobialtouchsurface.com/

Copper is an essential trace element in the body for maintaining good health. However, copper deficiency can ...