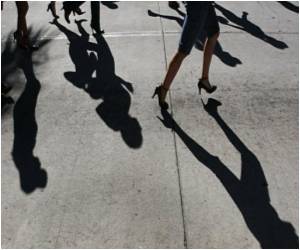 African-American women living in more densely populated urban areas gain less weight than women living in less densely populated areas. The results, which appear in the current issue of the American Journal of Preventive Medicine, were based on data collected in the Black Women's Health Study, an ongoing study of the health of 59,000 African American women conducted by the researchers since 1995.

While studies conducted at a single point in time have found higher levels of obesity among residents of sprawling areas compared to residents of more urban areas, there has been little information on this topic from studies that have followed residents over time.

The researchers assessed the association of women's residential environments with weight change and the incidence of obesity during a six year period of follow-up in the Black Women's Health Study. They focused on nearly 18,000 women who lived in the New York, Chicago or Los Angeles metropolitan areas. The women's residential neighborhoods were characterized by an "urbanicity score" considered dense urban neighborhoods.


They found that both six year weight gain and the incidence of obesity were lower among women who had high urbanicity scores as compared to those with low scores. Women who lived in suburban or rural neighborhoods were considered to have low urbanicity scores.

The BMI calculator helps you assess your weight indicating if it is normal or if you are underweight or overweight, based on your height.
Advertisement
According to the researchers, a previous study of these women, found those who lived in denser neighborhoods walked more than women in more sprawling areas. "Policies that encourage more dense and urban residential development may have a positive role to play in addressing the obesity epidemic," said lead author Patricia Coogan, MPH, D Sc, a senior epidemiologist at the Slone Center and an associate professor of epidemiology at Boston University School of Public Health.

Slide show which explains obesity causes and tips on how to lose weight. Exercising before breakfast is most effective for weight loss.
Advertisement
<< Teens With IBD are Less Fit Than Their Peers
Depression and Knee Arthritis >>

The best way to stay healthy and lose weight is to own a dog and make sure to take it on regular walks.
Advertisement
News A-Z
A B C D E F G H I J K L M N O P Q R S T U V W X Y Z
What's New on Medindia

Find a Hospital The Essence of Yoga Vent Forte (Theophylline) Hearing Loss Calculator Sanatogen Selfie Addiction Calculator Post-Nasal Drip Iron Intake Calculator Drug Interaction Checker Drug Side Effects Calculator
This site uses cookies to deliver our services. By using our site, you acknowledge that you have read and understand our Cookie Policy, Privacy Policy, and our Terms of Use