Skull Fracture is an injury that causes a break in the outer layer of the skull bones.

Skull fractures are the result of skull injuries with sufficient force to cause a break in the cortex (outer layer) of the skull bones. The most common cause of skull fracture is trauma with a large amount of force, enough to overwhelm the strong bones of our cranium. Hence, any severe trauma like falling from a height, or a road traffic incident, gunshot wounds or being hit with a hard object can cause a skull fracture. In some cases, skull fractures can happen with seemingly little force, which are called pathological fractures. In such cases, it is important to rule out some systemic causes for weakness of the bones, which include osteoporosis, multiple myeloma, and cancer with spread to the bones. 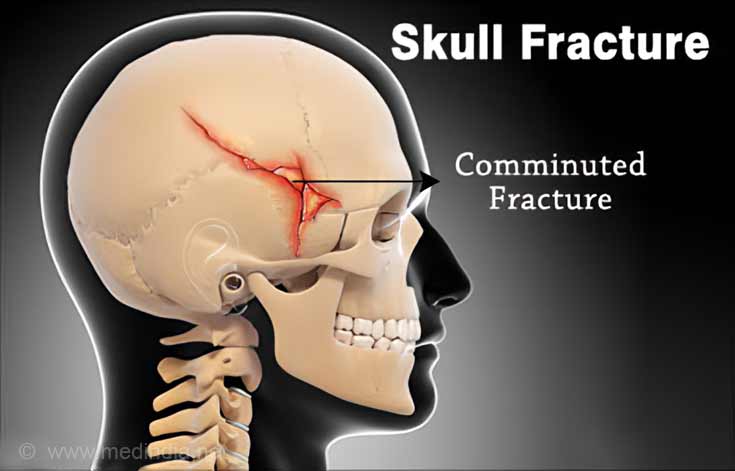 There are many types of skull fractures. The most basic types are simple (or closed) fracture and compound (or open) fracture. The various types of fractures which belong to one or the other of the above two broad categories are:

1. Depressed fracture  crushing of the skull with depression of a portion in towards the brain

2. Basilar fracture  fracture near the floor or base of the skull

a. Diastatic  passing through suture lines

b. Hinge  separates the floor of the skull into two halves

4. Ring fracture  around the foramen magnum, the largest opening in the base of the skull

6. Comminuted fracture  a fracture with many divisions

8. Gutter fracture  a long, narrow fracture of the skull, caused by a gunshot wound

Symptoms and Signs of Skull Fracture

Many a time, the symptoms and signs of skull fracture are similar to fractures in any other sites of the body, which include bleeding, bruising, pain, redness, swelling and tenderness of the affected area.

But since the skull is a specialized collection of bones guarding a very delicate and important part of the human body, there are other symptoms and signs of skull fracture, depending on the type, site of fracture and complications. These include:

a) Signs of intracranial bleeding such as headache, vomiting, confusion, loss of reactivity of pupils and loss of consciousness which may be interspersed with a period of clarity called a lucid interval.

b) Signs of infection of the brain or its coverings, such as high spiking fevers, irritability, restlessness and rigidity of the neck. 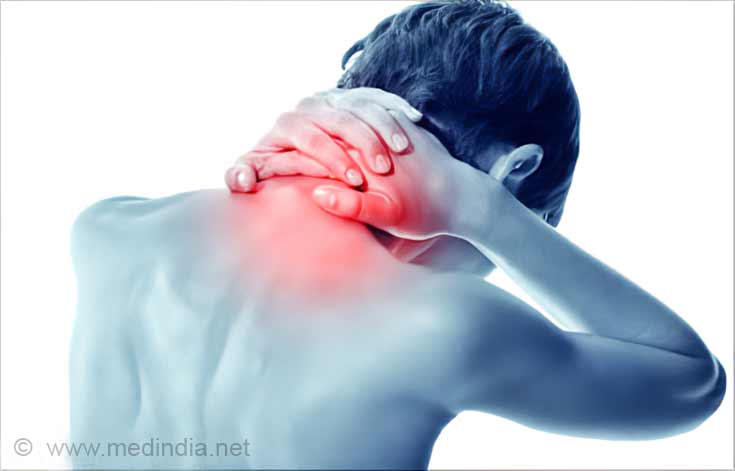 d) Basilar skull fractures can cause symptoms and signs localized to the area of fracture. The base of the skull has many openings, which transmit many blood vessels and nerves into and out of the skull. Some of the presentations include anosmia (a lack of smell), epistaxis (bleeding from the nose), rhinorrhea (leak of the cerebrospinal fluid from the nose), raccoon eyes, visual disturbances, deficits of sensation over the face, loss of muscle movement in the face, deafness, tinnitus (a ringing sensation in the ears).

e) The most devastating of skull injuries would be an injury near the largest opening of the skull base, called the foramen magnum. This large opening transmits the brainstem out of the cranial cavity and also transmits major arteries in to the cranium. Any fracture here may lead to sudden compression of the brainstem, which may cause instant paralysis of the respiratory and cardiac muscles, and hence, death.

f) Sometimes, chronic irritation of the brain after a fracture may lead to other presentations much later, which may manifest as epilepsy, or in a form of dementia called Dementia Pugilistica, which is most often seen in boxers.

I had head injury in April 2008 and suffered loss of memory but recovered soon. The fol symptoms still persist

a. I have lost my concentration to an extent that i have to focus my self deliberately to understand 4 lines script and to assimilate it while before the injury i used to have glimpses of any script and comprehension of it immediately

b. My retention power is almost lost i have to work so hard to memorize something

c. i have developed stiff neck forever around the neck pain feel like muscles stiffened even on right shoulders

Plz guide me if there is a solution

Hip Fracture
Hip fracture is a break in the upper part of thigh bone (femur) near to the hip joint. Hip fracture symptoms, causes and treatment are highlighted in this article.

Fracture-First Aid and Emergency Treatment Guide
A quick and simple First Aid guide on how to administer treatment for Fracture. Emergency first aid guide for fracture says about the do's, don'ts and preventive measures to be taken during fracture.

Compound Fractures
Compound Fracture is an injury that occurs when a fracture directly communicates with the external environment through an open wound. Compound fractures are also called open fractures.

Fracture
A fracture is a condition where the continuity of the bone is lost. Majority of bone fractures occur because of high force impact or stress on a bone.
Sign up for Wellness Consult a Doctor Sign up for Selfcare
Advertisement
Health Topics A - Z
A B C D E F G H I J K L M N O P Q R S T U V W X Y Z