What is Buruli Ulcer?

Buruli Ulcer, caused by Mycobacterium ulcerans, affects the skin and soft tissue leading to permanent disfigurement and disability to the affected individual. This necrotizing disease of the skin begins with a painless nodule on the skin or under the skin. Over a period of two weeks, it breaks down to form a necrotic ulcer with undermined edges. The ulcer may be larger under the surface of the skin and is surrounded by swelling.

As the disease progresses, bones are also infected, resulting in the necrosis (death of tissue) of bones.

The other names of Buruli ulcer are:

What are the Causes of Buruli Ulcer?

Burili ulcer is caused by Mycobacterium ulcerans, a member from a family of bacteria that causes tuberculosis and leprosy.

Transmission of M. ulcerans is not fully understood, though it is found to occur in those who are in close proximity to water. The infective agent may enter the body through a traumatic wound.

The organism produces a toxin called mycolactone that suppresses immune system and causes tissue death. The necrosis occurs without any initial inflammation or systemic symptoms like fever or pain.

The primary site of infection is the fat under the skin. The bacteria attack the fat and accumulate into groups of spherules within the dead cells. Skin ulceration takes place only after dramatic tissue death under the skin. These may further progress to granulation, scarring and contractures. The infection may also spread into the bone tissues.

What are the Symptoms and Signs of Buruli Ulcer? 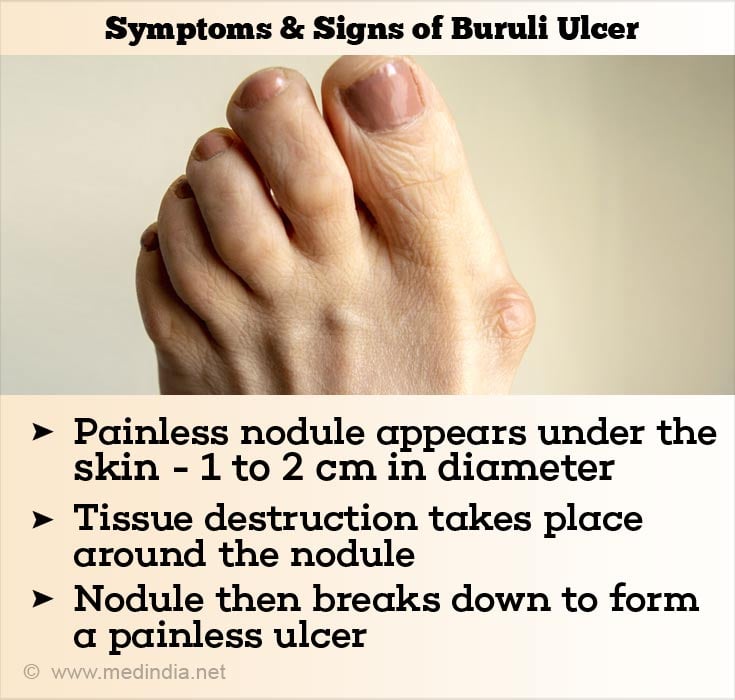 The extent of destruction caused by Buruli ulcer does not surface up until the tissues are really damaged. It is important that the ulcer is examined on time to help in proper diagnosis.

How to Diagnose Buruli Ulcer?

What are the Treatments for Buruli Ulcer?

Treatment of Buruli ulcer is done with various antibiotics including: 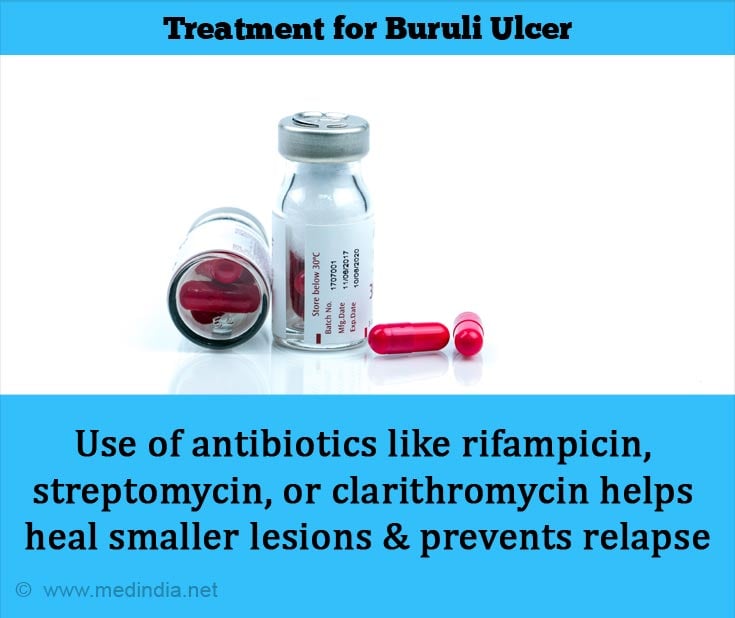 Rifampicin is either combined with streptomycin, clarithromycin or sometimes moxifloxacin and is prescribed for 8 weeks. Use of antibiotics for Buruli ulcer helps heal smaller lesions and also prevents relapse of the disease. Lesions less than 5 cm are seen to respond well to antibiotics given for eight weeks as a first-line treatment.

Surgery is done to remove the necrotic tissue. Debridement of necrotic tissue improves the rate of wound healing and prevents further deformity. Surgery must be aimed at conserving the existing healthy tissues around the scar. Skin grafting is done after debridement.

Heat therapy can be used in combination with medicines or when antibiotics are contraindicated. Heat delivered using servo-controlled heating coils or hot-air delivery systems have been used in the past.

Suitable rehabilitation is provided for the individual who has suffered extensive disabilities due to Buruli ulcer.

Buruli ulcer can be completely healed in most patients. The extent of damage done to the tissues however, cannot be reversed. WHO reports that nearly 80% of cases that are detected early can be cured with a combination of antibiotics.

Medical and surgical interventions take a long time, sometimes as much as 3 months of hospitalization. Further, rehabilitation in the form of using the limbs and counseling requires further time.

Tips For Glowing / Fairer Skin Glowing or fairer skin makes you look younger and feel healthier. There are many ways of taking care of your skin by using stuff at your home to work wonders.

Dry Skin Symptom Evaluation Dry skin a result in inadequate hydration of the skin. This could be either due to a reduced intake of fluids or faster evaporation following loss of oily layer on the skin.

Skin Disease Skin diseases also known as dermatologic disorders are many in number and so are their causes. The common skin diseases or skin disorders are usually related to the epidermal layer of skin.
Sign up for Wellness Consult a Doctor Sign up for Selfcare
Health Topics A - Z
A B C D E F G H I J K L M N O P Q R S T U V W X Y Z