Babesiosis is a condition, where the red blood cells of vertebrates are infected with microscopic parasites belonging to the genus, Babesia. The parasites require a vertebrate and a non-vertebrate host to complete their life cycle. Theyre transmitted to vertebrate hosts with the help of ixodid ticks that are in the nymph stage. Adult ticks may also participate in this transmission.

Babesiosis occurs in a large number of vertebrates with the number of identified Babesia species going beyond 100. Babesiosis is a zoonotic condition observed in humans and is caused by different parasites based on the region.

In Europe, the bovine parasite Babesia divergens causes a severe form of human babesiosis. In North America, the rodent (mice with white feet) parasite Babesia microti or a second species, the WA1 piroplasm, cause babesiosis in humans.

A recent study in China, identified Babesia venatorum as the cause for babesiosis in humans. There are diverse manifestations to this disease that range from an infection that goes unnoticed to malaria-type of symptoms that may result in death. 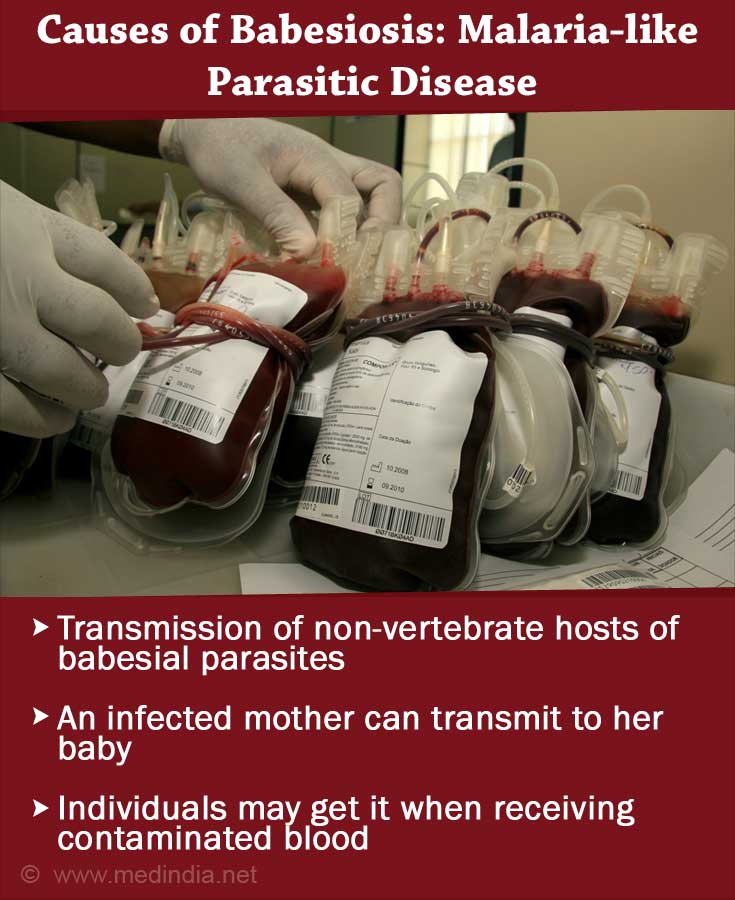 In general, individuals affected by the babesial parasites do not show any major symptoms and feel fine. Such individuals may remain carriers for a period ranging from a few weeks to months, and even years. The symptoms of babesiosis manifest themselves on the basis of the life cycle of the parasite in the human red blood cells. The parasites life cycle ranges from one to six weeks or may last until three months. This is the incubation period of the parasite. When the parasites break out of the red blood cells, certain individuals demonstrate visible symptoms in the mild to moderate range as outlined below: 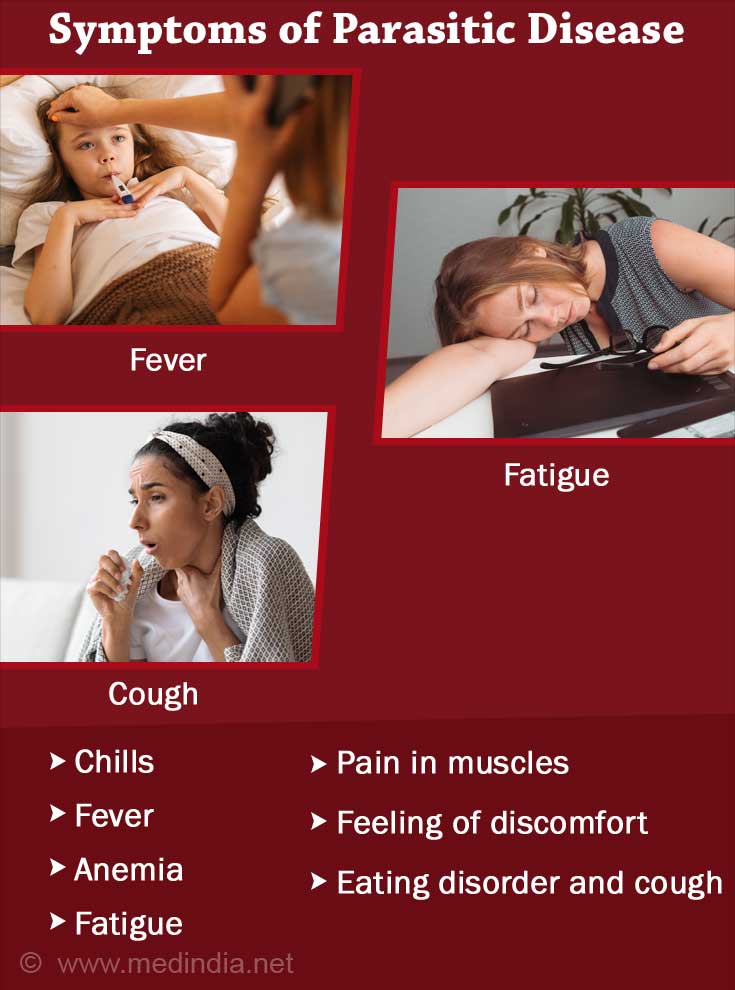 Splenectomized individuals suffer from jaundice, pulmonary edema, renal and liver failure. Leukopenia and thrombocytopenia are other manifestations of this condition.

The diagnosis of babesiosis may be classified into 2 categories: 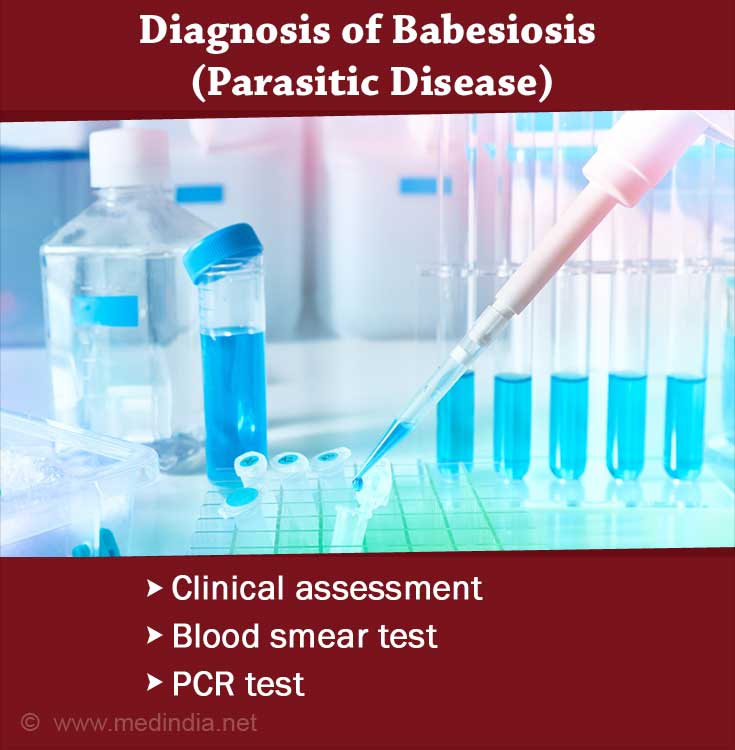 Treatment of individuals with babesiosis is dependent on the severity of the infection.

Mild to moderate: Clindamycin and quinine are given in combination to treat the symptoms of babesiosis. However, this combination of drugs leads to severe side effects. Patients with gasteroenteritis and tinnitus are unable to tolerate this drug regimen. Azithromycin and atovaquone are milder and administered for 7 to 10 days to treat mild to moderate babesial infections. These drugs may be used in children. 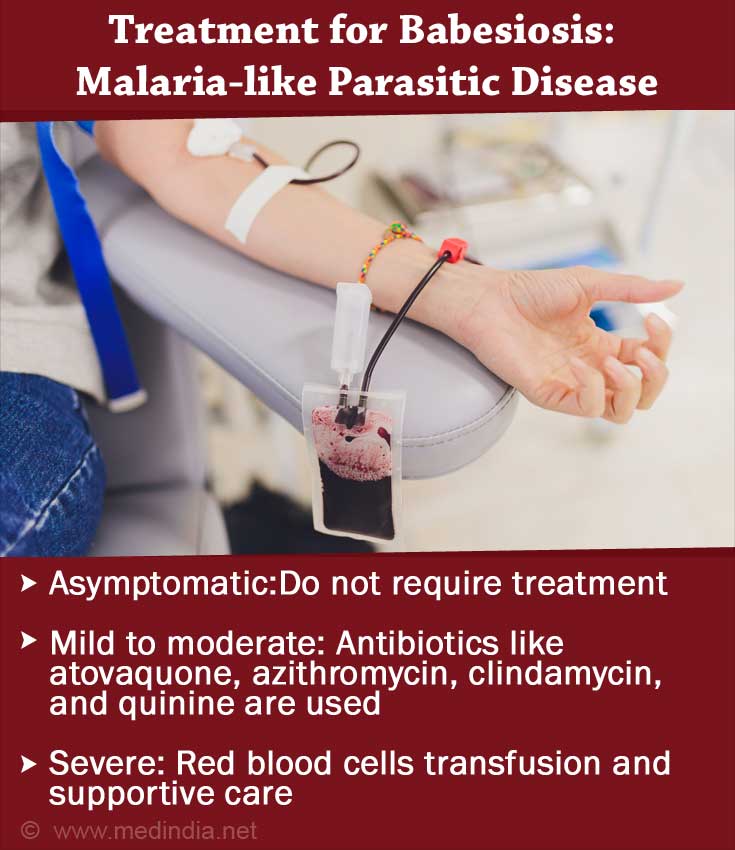 Latest Publications and Research on Babesiosis

Scientists Track Parasites With Satellites Scientists are teaming up to use satellite data to target deadly parasites to help predict patterns of parasitic diseases such as malaria, worms and hydatids.

New Mechanism May Help Parasites Manipulate Hosts, Alter Human Behavior These findings are important to understand how parasites persist in the brain and how this 'rewiring' affects behavior in both rodents and humans.

How to Choose the Best Eczema-Friendly Moisturizer for Children?
View all
Babesiosis - Related News
Parasite in Cat Feces Shows Promise in Fighting Ovarian Cancer
Sushi Lovers Warned To Watch Out For Parasites in Raw Fish
Can Parasite Strain-Specific Factors Determine the Severity of Malaria?
More News