The prostate is a walnut-sized gland that is a part of the male reproductive system. It secretes a fluid that nourishes and protects the sperms, which are the male reproductive cells. Cancer of the prostate is a major cause of concern in aging men. Prostate cancer usually resolves after primary therapy in the majority of men. However, in some men, a condition called biochemical recurrence (BCR) occurs, also known as biochemical relapse or PSA failure.

In this condition, the prostate-specific antigen (PSA), a protein produced by the normal and prostate cancer cells starts to become elevated and detectable by the PSA test. There are different cut-offs for the PSA level, depending on the treatment modality, such as surgery or radiotherapy.

If the PSA level is higher than normal, there is a high chance that cancer can come back, which is technically termed as "recurrence". It has been reported that approximately 20-40 percent of men who had undergone curative treatment may experience BCR. BCR can be considered to be a micro-metastatic condition or precancer, i.e., cancer that has the potential to spread to other parts of the body. It can be likened to a ticking timebomb, which could explode at any moment and proceed to full-blown metastasis (spread of cancer) in the absence of timely medical intervention.

In case BCR transforms into metastatic cancer, it can spread to various regions. Most common sites are located nearby. Besides the prostate gland itself, it commonly spreads within the hip bone region (pelvis), especially affecting the pelvic lymph nodes. It can also spread beyond the pelvic region, affecting bones and even the lungs and other organs.

There are essentially four strategies that can be adopted for the detection of BCR. In the early stages, merely estimating the blood levels of PSA will suffice. However, if it is suspected that cancer has already started to spread, then a digital rectal exam (DRE) and imaging may be required. 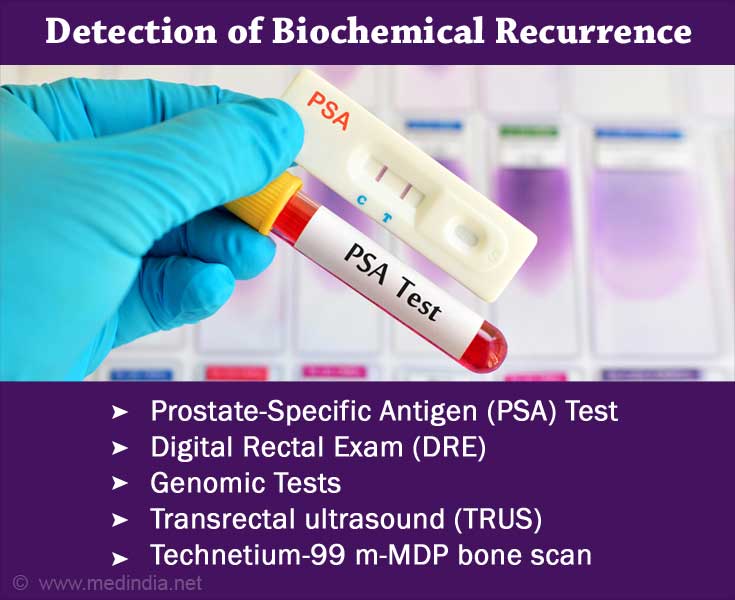 In rare cases, genomic testing may be recommended by the oncologist. These are briefly highlighted below: 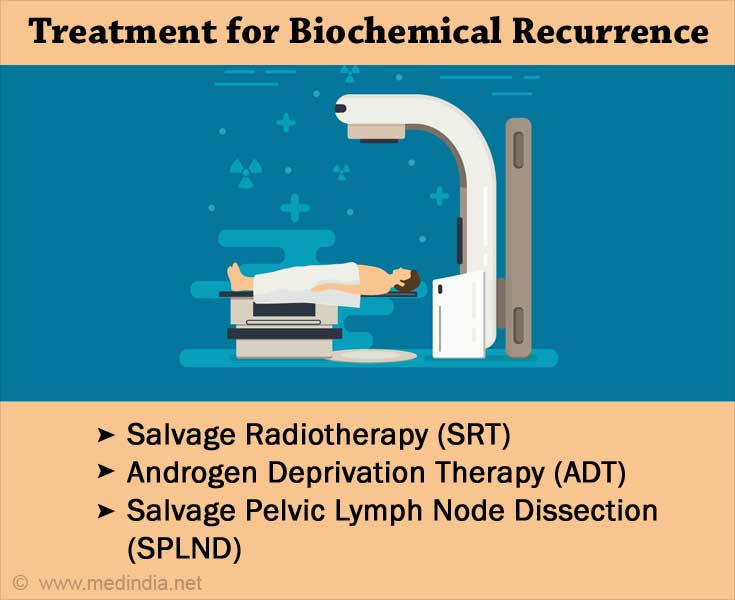 There are a few treatment options for men with BCR, which are briefly highlighted below:

With rapid advances in modern technological innovations, physicians have become more and more empowered to deliver the best treatments for their patients. The latest state-of-the-art imaging technologies, genomic testing, and robotic surgery have ensured that patients with BCR of prostate cancer can get the best possible care they need so that they stand a better chance of long-term control and cure.

Obesity may Up Risk of Recurrent Prostate Cancer Prostate cancer among men who have undergone radical prostatectomy (RP) and who were obese and had metabolic syndrome were associated with an increased recurrence of the disease.

Quiz on Prostate Cancer Prostate cancer is fast gaining as a common cancer form among men; more threatening since its symptoms often go unnoticed until it's too late. This quiz tests your knowledge on prostate cancer, its diagnosis and treatment options and is as ...

Smokers at Higher Risk of Recurrence of Prostate Cancer Even After Surgery More than 90,000 European men died in 2012 due to prostate cancer; it is the third most common cancer among men in Europe.