Scientists have found that cancer cells cause neighboring cells to regress into stem-cell-like states and metastasize.

The study was led by Ilaria Malanchi at the Crick Institute and Joo-Hyeon Lee at the Cambridge stem cell institute.

The research team discovered that healthy, non-cancerous cells in the tumor microenvironment were influenced by cancerous cells and regressed into stem-cell-like states thereby promoting tumor growth and aiding metastasis. They developed a labeling system for the metastatic group of cells where the cells release cell-penetrating fluorescent protein, and this gets into neighboring non-cancerous cells.


The colored labeled cells can be identified with non-colored cells which have not yet been influenced by cancerous cells. Ilaria's lab used this labeling and tagging system to study tumor cells in mouse breast cancer which had spread to the lungs.

The study found that labeled parenchymal cells from the lung had features similar to stem cells with a capacity to renew itself and replicate. These cells from the lungs when mixed with tumor cells and cultured in the lab supported rapid tumor growth and helped the cancer thrive and spread.

This system can be clearly used to tag cancerous cells and their influence over surrounding tumor microenvironments to predict and prognosticate the likelihood of metastasis.

The researchers hope that this system will be used by other scientists to study how cancers survive, grow and resist treatments.

The study was published in the journal Nature

Four Hallmarks of Cancer Metastasis Discovered
Four hallmarks of metastasis namely motility and invasion, modulation of the microenvironment, plasticity and ability to colonize have been discovered.
READ MORE 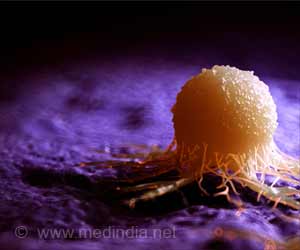 Five Times More Metastasis of Breast Cancer in Women Within 10 Years of Childbirth
Breast cancer in young women have five times more metastasis than breast cancer in women who had no recent childbirths or in those who did not have a child.
READ MORE