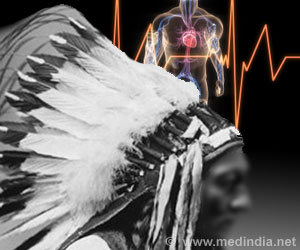 Though native Americans living in the southwestern region are obese and overweight and are being treated for hypertension and hyperlipidemia, the prevalence of vascular risk is relatively low among them. Southwest Heart Mind Study is a pilot study published in the journal Ethnicity & Disease.

Five controlled trials have been initiated to test the effectiveness of community responsive interventions to reduce heart disease in Indian Country.
Advertisement
‘Southwest US is home to most American Indian communities and aging increases their risk for developing vascular and metabolic diseases. Though, aging is rapid, the risk is relatively low among these tribes.’
Tweet it Now

Dr. Gustafson is professor of neurology at SUNY Downstate Medical Center and Dr. Gachupin is assistant director of the University of Arizona Cancer Center's Cancer Health Disparities Program and the Native American Research and Training Center.


The researchers note that American Indian and Alaska Native (AIAN) communities in the United States are aging; the older AIAN population (Non-Hispanic and Hispanic) was 212,605 in 2007 and is projected to reach almost 918,000 by 2050.

A new study revealed that the Native American population was wiped out by genocide that took place circa 800 A.
Advertisement
The Southwest US is home to most AI communities. Accompanying aging is a profound increase in vascular and metabolic diseases - many due to obesity. Among AIANs, the study team expects to identify 23,850 persons age 65 years and older as having had dementia in 2010, a number they expect to increase to 100,980 by 2050.

The Southwest Tribe within the study is from the Albuquerque Area (AA) of the Indian Health Service. At the time of this survey there were 19% (16,293/86,000) of individuals age 50 years and older in the AA. These pilot data form the basis for future investigations.

The increased risk of kidney disease in African Americans is due to genetic variations in a gene called apolipoprotein L1 (APOL1), which creates HDL cholesterol.
Advertisement