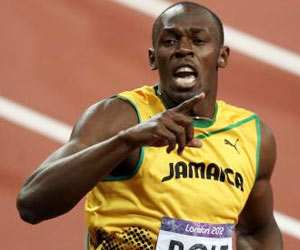 According to Facebook's 'mention' charts, Bolt was the most talked about athlete on the social site, after he broke a Twitter Olympic record last week, with more than 80,000 tweets per minute following his 200m victory in the Games.

Doping tests are done to prevent unethical ways to win games since early 90s. Since then, many famous athletes were caught using steroids to win a sport and set a mark in history.
Advertisement


The survey by Facebook claimed that Douglas was the most talked about female athlete on the site followed by Team GB's gold medal winner Jessica Ennis and U.S. tennis ace, Serena Williams.

A rush of romance has been caused by the Olympics.
Advertisement
Phelps' Facebook fan base overall grew the most, with an additional 747,300 new digital fans, while Bolt came in second, adding 694, 200 new fans and Ennis was placed third with 621,600 additional supporters on the site, the paper said.

The survey also showed that Usain Bolt's victory in the 100 meters was the most talked about Olympic event on Facebook, followed by Andy Murray's victory against Roger Federer and then Ennis's gold medal victory in the heptathlon, the paper added.

The verdict among the common man in Britain is split over the London Olympics.
Advertisement
<< For Young Women, Looks Matter More Than Health
Cosmopolitan's Editor-in-chief Helen Gurley Brown Passes Aw... >>

All Set for the Usain Bolt Show

Calculate Ideal Weight for Infants Accident and Trauma Care Blood Donation - Recipients Loram (2 mg) (Lorazepam) Turmeric Powder - Health Benefits, Uses & Side Effects The Essence of Yoga Diaphragmatic Hernia Color Blindness Calculator Noscaphene (Noscapine) Find a Hospital
This site uses cookies to deliver our services. By using our site, you acknowledge that you have read and understand our Cookie Policy, Privacy Policy, and our Terms of Use