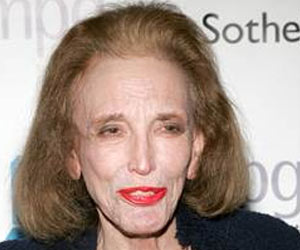 Hired by magazine publisher Hearst to turn around Cosmopolitan three years after her 1962 best-selling book 'Sex and the Single Girl,' she edited the magazine for 32 years, the BBC reported.

A new survey has found that women between the age of 18 and 40 years are sexting more than ever.
Advertisement

Under her, the magazine became famous for encouraging women to have sex, regardless of marital status.


Brown said her aim was to tell readers "how to get everything out of life - the money, recognition, success, men, prestige, authority, dignity - whatever she is looking at through the glass her nose is pressed against."

Spirituality on the Rise Among Cosmopolitans, Religion Takes a Beating

A new University of Chicago survey has revealed that religious institutions may be waning in the U.S, but private religious practices like prayer are actually on the rise.
Advertisement
New York Mayor Michael Bloomberg paid tribute to Brown, saying that New York City had lost "a pioneer who reshaped not only the entire media industry, but the nation's culture."

"She was a role model for the millions of women whose private thoughts, wonders and dreams she addressed so brilliantly in print. She was a quintessential New Yorker: never afraid to speak her mind and always full of advice," he said.

Brown was born in Arkansas on 18 February 1922, and moved to Los Angeles after her father died.

She graduated top of her class at John H Francis Polytechnic High School in 1939 before working as a secretary at various advertising agencies.

When finally given the chance to write advertising copy, she began winning prizes and became the highest-paid advertising woman on the west coast.

She was married at age 37 to former Cosmopolitan managing editor and movie producer David Brown, who encouraged her to write the book that became 'Sex and the Single Girl.'

The bestseller has been published in 28 countries and translated into 16 languages. Brown wrote an additional five books over the course of her career.

Cosmopolitan's relentless focus on sex and Brown's approval of cosmetic surgery made her a controversial figure among feminists.

Brown soon turned around Cosmo's stagnant circulation. Within four issues, sales rose, even as the price of the magazine increased. Annual sales peaked at three million in 1983.

By the time Brown stepped down as editor-in-chief of the American edition in 1997, the magazine was selling 2.5 million copies.

Brown continued to be editor of the magazine's 64 international editions until her death.