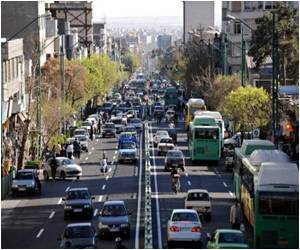 The most common cause of vision loss among the elderly is the advanced neovascular, or "wet," form of age-related macular degeneration (AMD) if left untreated. It is also a leading reason for their loss of driving privileges. Despite this, the results of a new study, published in the online version of the journal Ophthalmology, suggest that monthly injections of ranibizumab improve eye chart test results required for a driver's license, build driver confidence and keep those with AMD driving longer.

The wet form of AMD is marked by the abnormal scarring and leaking of new blood vessels in the macula, or center of the retina, the light-sensitive layer of the eye used for driving, reading or recognizing faces. Treatment with ranibizumab, a drug made partly from a human monoclonal antibody fragment, is done by injecting it monthly (or as needed with frequent evaluations) into the middle of the eye with a tiny needle about the diameter of a hair. The medicine eliminates or slows new scar and leaking blood vessel formation.

Vision Tests For Elderly Drivers Not Proven To Prevent Crashes

"Driving is an important measure of independence and quality of life for many people in the United States. Participants with wet AMD in our study perceived that they were not driving because of their diminished eyesight," said senior author, Neil M. Bressler, M.D., the James P. Gills Professor of Ophthalmology and chief of the Retina Division at the Wilmer Eye Institute at Johns Hopkins Medicine. "Our study, believed to be the first of its kind to look at whether outcomes relevant to driving improve with treatment, suggests that monthly injections of ranibizumab may be an extremely helpful option in allowing the elderly to continue driving."

Brain training sessions for elderly drivers is effective in reducing the risks of car collisions and accidents by 50% in comparison to their untrained counterparts.
Advertisement
Based on the results of two previous reports from these studies, ranibizumab was better than sham and PDT treatments with respect to avoiding loss of vision when treating patients with an eye affected by wet AMD. This new analysis of those trials by Bressler and colleagues looked beyond the results of these treatments on reading an eye chart to clinically relevant outcomes regarding the impact of this treatment on driving in three ways: treatment versus no treatment in those who said they were driving or not driving at the beginning and end of the study; treatment versus no treatment in participants who had vision at the beginning and end of the study that would qualify them for an unrestricted driver's license in at least 45 of the U.S. states; and a standardized questionnaire assessing the patients' own perception about the level of difficulty driving in difficult conditions such as rain or fog or at night. The 45 states all require correctable vision of at least 20/40 in one eye to qualify for an unrestricted driver's license.

"What the study showed was that 85 percent of participants in the ranibizumab versus sham study and 88 percent in the ranibizumab versus PDT study read the eye chart better also achieved the level of vision required for an unrestricted license and in turn had greater confidence in driving," noted Bressler. The researchers cautioned that more research is needed to determine whether driving skills or driving safety are actually maintained or improved, and whether they match up with patient perceptions of their abilities reported on the questionnaire.

"Our study has limitations because these two studies were not designed to directly assess the impact of ranibizumab on driving, and because there was just a small number of patients in the groups that were analyzed relative to the hundreds of thousands of patients affected by the wet form of AMD each year around the world," Bressler stated. "One of our next steps is to look at these same outcomes when treatment is given for diabetic macular edema, swelling at the center of the retina as a result of diabetes, the most common cause of vision impairment in working-age adults in the U.S. and abroad."

Researchers studying driving habits and accident rates among the elderly found a majority surveyed supported mandatory retesting of drivers based on
Advertisement
<< Emotional Health Being Risked by People Spying on Ex on Fac...
In Alberta Provincial Effort to Improve Stroke Care is 'Pay... >>