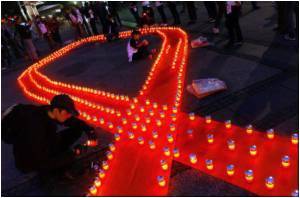 "Omololu Falobi lived life only for 35 years. Yes he was in a hurry. He was a visionary. For those who knew him they would realize that this conference was part of his vision. M2010 is a turning point where it has become glaringly obvious that developing and rolling out new HIV prevention technologies is as much about community voices, politics, media, culture as it is about science. That's what Omololu thought of, that's what he dreamed of", said Manju Chatani Gada, at the closing ceremony of the International Microbicides Conference (M2010) in Pittsburgh, USA. Manju represents AVAC: Global Advocacy for HIV Prevention, African Microbicides Advocacy Coalition (AMAG) and has demonstrated a rich experience of community-centric responses to AIDS globally.

"Omololu was killed in October 2006 in Lagos, Nigeria. He was a powerful international activist, a gifted journalist, a friend, a father, and a force to be reckoned with when it came to community activism. He founded and led the Journalists' Against AIDS in Nigeria (JAAIDS) and was instrumental in establishing several coalitions including the New HIV Vaccine and Microbicides Advocacy Society. His vision was of Africans to have a say in the issues that affected their lives and community advocates everywhere to be involved in shaping the response to AIDS" said Manju Chatani Gada.


"The field is growing fast and changing and many new faces are in this room. Perhaps many of you may not have been privileged to know Omololu. But rest assured, some project you know of, some network you are part of, some journalist who has covered your research, was touched by him. His vision lives in the form of Omololu Falobi Award for Excellence in HIV Prevention Community Advocacy" said Manju Chatani.

Encyclopedia section of medindia explains in brief about the prevention for AIDS/HIV
Advertisement
The award was created to have an ongoing legacy to recognize the commitment of HIV prevention research advocates. The award was established by the African Microbicides Advocacy Group (AMAG), in partnership with AVAC, the Global Campaign for Microbicides (GCM), Journalists Against AIDS (JAAIDS) and the New HIV Vaccine and Microbicides Advocacy Society. We thank a number of supporters including AMAG, AVAC, Family Health International (FHI), Global Campaign for Microbicides (GCM), NHVMAS and the joint United Nations programme on HIV/AIDS (UNAIDS)

"Omololu was an incredible man" said the inaugural recepient of 2008 Omololu Falobi Award for HIV Prevention Community Advocacy Lori Heise. "Charles' enthusiasm is infectious and he has been committed to helping recruit and mentor new people to the movement to expand the range of HIV prevention options," said Lori Heise, former Executive Director of the Global Campaign for Microbicides and one of the inaugural recipients of the award and member of the 2010 selection committee. "We need more people like Charles who can ably bridge the gap between researchers and community members."

The 2010 recepient of Omololu Falobi Award for HIV Prevention Community Advocacy, Charles Shagi, is a community educator who developed innovative ways to link women in Tanzanian villages with life-saving HIV prevention information and with HIV prevention research trials. Charles Shagi, a Program Officer for the African Medical and Research Foundation based in Mwanza, Tanzania, was honored for his significant contributions to developing and sustaining community engagement and education programs that empower women and their communities to advocate from themselves and to become vital partners in HIV prevention research trials.

"Bringing HIV prevention research to communities is an essential part of our work to develop new HIV prevention options for men and women," said Sharon Hillier, Microbicides 2010 Co-chair and a member of the award selection committee. "Charles embodies what this award was created to recognize: leadership, commitment and passion in community advocacy. He works tirelessly not only to help women advocate on their own behalf and to become involved in research, but also to educate and empower researchers to understand the needs of women, their families and communities."

Charles works tirelessly not only to help women, their families and their communities advocate on their own behalf and to become involved in research.

"I am very humbled to accept this award, and for me, it really underscores the value this field put on the importance of reaching out to the women. - in the villages of Tanzania and around the world - who participate in these trials" said Shagi. "This award is important because it proves that people do care about them. It is the courage of those women that is being honored today. I look forward to continuing to share the voices and experiences of vulnerable women with the research and advocacy communities."

"I urge all HIV prevention researchers to listen to the community. There is need for all of us to change attitude, but especially the researchers and our leaders since we have a long walk left. Communities should be at the center of research, not at the periphery," Shagi added.

The Omololu Falobi Award highlights the essential role of community advocacy and leadership in HIV prevention research. It celebrates the life and values of the late Omololu Falobi, a long-time HIV advocate and journalist who founded Journalists Against AIDS in Nigeria, was an instrumental pioneer member of the Nigerian Treatment Access Movement, and co-founded the New HIV Vaccine & Microbicide Advocacy Society. Omololu was killed in Lagos, Nigeria in October 2006. The award was conceived as an ongoing legacy that recognizes his commitment and lasting contributions to HIV prevention research advocacy.

"Omololu was a visionary leader and activist, who accomplished much in his too short a life. He dedicated himself to powerful advocacy for HIV and HIV prevention research in Nigeria, Africa and worldwide," said Funmi Doherty of NHVMAS in Nigeria. "It is gratifying to see his ideals and vision live on through this award. I know he would be immensely proud of the work that Charles and the past recipients are doing to simultaneously advance human rights and HIV prevention research."

Shagi was chosen from among an impressive group of almost 20 nominees by an independent international panel of HIV prevention research advocates, policy makers, and scientists. The selection committee noted his instrumental role in pioneering new ways to bring the voices of community members and participants into the research process.