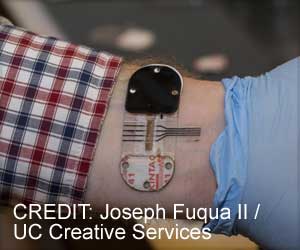 Newly developed sensor that samples sweat as effectively as blood in a noninvasive way can enable doctors to track patients' health status over time, reports a new study.

Advertisement
‘Newly developed a sensor that stimulates sweat under a tiny patch even when its wearer is cool, and resting can allow doctors to track health over time to see whether a patient is getting better or worse.’

University of Cincinnati professor Jason Heikenfeld examined the potential of these and other biofluids to test human health with tiny, portable sensors for the journal Nature Biotechnology.


Heikenfeld develops wearable technology in his Novel Device Lab in UC's College of Engineering and Applied Science. His lab last year created the world's first continuous-testing device that samples sweat as effectively as blood but in a noninvasive way and over many hours.
Advertisement
"Ultimately, technological advances in wearables are constrained by human biology itself," the study said.

Remarkably, many of the innovations in the field of biosensors and sweat technology were developed in Cincinnati. The first glucose monitor for diabetes was commercialized in the region. The inventor of the world's first antiperspirant, called Odorono, was a Cincinnati physician named Abraham Murphey.

"We have such a strong history in this field here. It's really fascinating," Heikenfeld said.

Heikenfeld credits the hard work of his team for his lab's success.

"We have been able to go far and fast here," Heikenfeld said. "We resonate with a certain type of student. As much as we have brilliant faculty at UC, if we didn't have talented students here, this technology wouldn't exist. We would just be talking theoretically about the potential."

In the Nature article, Heikenfeld identified four waves of discovery when it comes to testing human health. First, doctors began drawing and shipping blood to labs in an invasive, time-consuming and labor-intensive process that patients still undergo today.

Starting around the 1980s researchers, including pioneering UC engineering professor Chong Ahn, developed point-of-care lab tests that allowed doctors to get immediate results. Instead of shipping samples to a lab, doctors could test samples themselves using tiny self-contained devices.

"Dr. Ahn has been at the forefront of developing these point-of-care devices," Heikenfeld said.

Now, Heikenfeld said, we're in the midst of a third wave -- continuous health monitoring with wearable devices like those developed at UC. These provide data over time so doctors can track health trends instead of relying on the snapshot that a single blood test provides.

"That's super powerful because it tells me am I getting better? Am I getting worse?" Heikenfeld said.

Eventually, the field will see devices implanted in the body for long-term diagnosis or monitoring, he said. But first researchers will have to create robust sensors that can provide accurate information over a much longer time frame.

"That's the big challenge," Heikenfeld said. "Sensors are chemically reactive themselves. So they don't last."

After examining the use of saliva, tears and interstitial fluid, Heikenfeld concluded in the Nature article that sweat holds the most promise for noninvasive testing because it provides similar information as blood and its secretion rate can be controlled and measured.

In his Novel Device Lab at UC, Heikenfeld and his students have been creating new sensors on a wearable patch the size of a Band-Aid that stimulates sweat even when a patient is cool and resting. The sensor measures specific analytes over time that doctors can use to determine how the patient is responding to a drug treatment.

The sensors can be tailored to measure anything from drugs to hormones to dehydration, Heikenfeld said.

Last year the lab created the world's first continuous-monitoring sensor that can record the same health information in sweat that doctors for generations have examined in blood. The milestone is remarkable because the continuous sensor allows doctors to track health over time to see whether a patient is getting better or worse. And they can do so in a noninvasive way with a tiny patch applied to the skin that stimulates sweat for up to 24 hours at a time.

"This is the Holy Grail. For the first time, we can show here's the blood data; here's the sweat data - and they work beautifully together," Heikenfeld said.

Heikenfeld and his students published their latest experimental findings in December in the journal Lab on a Chip. UC's study tracked how test subjects metabolized ethanol. The study concluded that sweat provided virtually the same information as blood to measure a drug's presence in the body.

The latest breakthrough at UC marked the culmination of more than seven years of research, he said.

"For medications, we can use sweat to get an exact measurement of concentrations in the blood," Heikenfeld said. "That's important because once we can measure concentrations of therapeutics in blood, we can look at drug dosing. And that could make current dosing look like something from the Stone Age."

Cincinnati is home to several companies that are turning technologies for drug prescribing, delivery and monitoring into commercial products. The list includes Assurex Health, Enable Injections and Heikenfeld's Eccrine Systems, where he is co-founder and chief science officer.

Study co-author and computational biologist Tongli Zhang said devices like these will help doctors to provide personalized care. Zhang is an assistant professor in the Department of Pharmacology and Systems Physiology at the UC College of Medicine.

"You don't give children the same drug dose as adults. Likewise, we can specify a dose based on a patient's weight," Zhang said. "But some patients might have liver or kidney failure. And others might metabolize a drug 10 times faster. So the same dose might be ineffective in some patients and toxic in others."

"Personalized or individualized medicine is becoming a bigger deal. We realize it's important. If we can understand what's going on in the body, we can tailor the treatment accordingly," he said.

UC is at the forefront of developing new biosensors that Heikenfeld thinks will revolutionize the way we track disease and wellness.

"UC continues to build on our rich regional history in revolutionizing diagnostics through this third wave of continuous biochemical sensing," he said.

Source: Eurekalert
Advertisement
<< Serious Lung Infections in Children Could be Predicted from ...
Cognitive Development at 2 Years Predicted Through AI and MR... >>