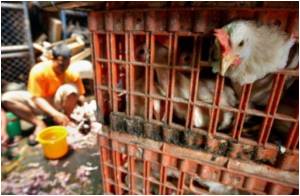 The public health threat that the virus poses increases the need for the government to take protective measures ahead of a possible pandemic, following reports declaring human cases of virus infections by the Chinese National Health and Family Planning Commission in March, the Springer reports.

Analysis of the influenza viruses collected from live poultry markets and poultry farms located in Shanghai and Anhui Province has revealed that 20 samples tested positive for the presence of H7N9 influenza viruses, out of which 10 were isolated from chickens, 3 from pigeons, and 7 were from environmental samples, in a total of 970 samples collected by a group of scientists led by Professor Chen Hualan of the Harbin Veterinary Research Institute at the Chinese Academy of Agricultural Sciences.


The samples were analyzed on grounds of drinking water, feces, contaminated soil, and cloacal and tracheal swabs, where the chicken, pigeon and environmental sample isolates showed that six internal genes were derived from avian H9N2 viruses, but the ancestor of their hemagglutinin (HA) and neuraminidase (NA) genes is unknown.
Advertisement
HA receptor-binding specificity is a major molecular determinant for the host range of influenza viruses and the scientists found that the HA protein in the viruses is characteristic of the HA gene in human influenza viruses, implying that H7N9 viruses have partially acquired human receptor-binding specificity.

The scientists have urged the government to take strong measures such as continued surveillance of avian and human hosts, control of animal movement, shutdown of live poultry markets, and culling of poultry in affected areas, at the initial stage of virus prevalence, adding that the adverse effects of the virus on human health can only be reduced if effective vaccines and antiviral drugs are developed after evaluating the pathogenicity and transmissibility of these H7N9 viruses.