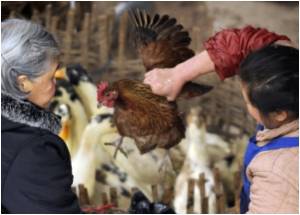 The virus has already killed her mother, and Kelly Gu's father lies critically ill with H7N9 bird flu in a Shanghai hospital bed. They are the only couple both infected in China's outbreak of the disease.

As her mother lay dying Gu was urgently summoned back to Shanghai from her doctoral studies in chemistry in France, but she was too late, missing the chance to say goodbye by a day.

In her first interview with Western media, she told AFP she knew her mother was dead when her father, already showing symptoms of fatigue and fever, told her by phone: "It's just like winning a lottery, it's a lottery of very bad luck."


The Gu family's experience portrays a government-run health system battling a new disease, while sometimes showing a lack of empathy for victims and their kin.
Advertisement
The H7N9 strain of bird flu has sickened 130 people in mainland China and killed 35 of them, according to the latest available national figures.

The government and World Health Organization (WHO) have repeatedly said there is no evidence of sustained human-to-human transmission, but Gu's parents could be a rare "family cluster".

Experts of the US government's Centers for Disease Control public health agency say such clusters could represent limited spread between people caused by prolonged, unprotected exposure.

If the virus were to mutate into a form easily transmissible among humans it could trigger a pandemic.

Gu, 26, said her father, who works in a property management office, was sad about his only child living overseas -- a fact that may have saved her life.

Her mother, a 52-year old housewife she described as an optimist with a knack for technology, was probably infected on her daily trip to market near their home in western Shanghai.

She had already been ill for five days by the time the central government revealed the H7N9 outbreak, going twice to a district-level hospital. The next day, having trouble breathing and suffering from fever, she went to one of Shanghai's finest hospitals, Huashan.

But the emergency room doctor sent her home, ordering three days rest. She was dead in two.

Beijing has been praised by the WHO for openness over H7N9, in contrast to its cover-up a decade ago of Severe Acute Respiratory Syndrome (SARS), which originated in China and killed 800 people globally.

But critics question why it took the government three weeks to make an announcement after the first deaths, despite Internet postings describing a mysterious illness at a Shanghai hospital.

And the case of Gu's parents -- she declined to give their full names -- reflects how the government-run health system struggled in the early stages.

"(The doctor) hadn't seen the scanning result of my mother's lung and he hadn't asked her to take another one. He just judged it was a normal fever and sent her back home," Gu said.

Her mother died on April 3 of acute respiratory distress, and was confirmed to have the H7N9 virus a day later, one of Shanghai's earliest cases. Her father had started showing symptoms on April 1.

There are only two other such "family clusters", a father and two sons in Shanghai and another father and son in Shandong province.

Gu's father has defied doctors' expectations by clinging to life, but is under sedation on a respirator and does not respond when she tries to talk with him on a video link.

She makes a daily trek to see him at an isolation hospital in southwest Shanghai, where green lawns give it the atmosphere of a country club, and consult with doctors who say there is little they can do.

In desperation, she sneaked into a news conference with a visiting WHO team last month to ask about possible treatment for her father, but Shanghai officials cut her off before she could complete her question.

"Even though the doctor said the possibility was zero, I never gave up," she said. "If he can recover, I'll stay with him. I'll take the place of my mother and take care of him."

But her father had seen the rapid deterioration in his wife's health, and the symptoms described by a public health poster in Huashan hospital. As he fell ill he recognised the symptoms in himself.

"When my mother passed away, my father just held her hand and said, 'Wait for me. I'll be there to accompany you,'" Gu said.