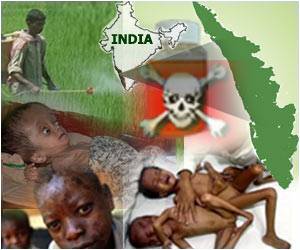 Increased risk of obesity, diabetes, high cholesterol and related conditions in female offspring later in life has been found to be linked to exposure of pregnant mice to the pesticide DDT, in a study led by the University of California, Davis.

The study, published online July 30 in the journal PLOS ONE, is the first to show that developmental exposure to DDT increases the risk of females later developing metabolic syndrome -- a cluster of conditions that include increased body fat, blood glucose, and cholesterol.

DDT was banned in the United States in the 1970s but continues to be used for malaria control in countries including India and South Africa.


Scientists gave mice doses of DDT comparable to exposures of people living in malaria-infested regions where it is regularly sprayed, as well as of pregnant mothers of U.S. adults who are now in their 50s.
Advertisement
"The women and men this study is most applicable to in the United States are currently at the age when they're more likely to develop metabolic syndrome, because these are diseases of middle- to late adulthood," said lead author Michele La Merrill, assistant professor of environmental toxicology at UC Davis.

The scientists found that exposure to DDT before birth slowed the metabolism of female mice and lowered their tolerance of cold temperature. This increased their likelihood of developing metabolic syndrome and its host of related conditions.

"As mammals, we have to regulate our body temperature in order to live," La Merrill said. "We found that DDT reduced female mice's ability to generate heat. If you're not generating as much heat as the next guy, instead of burning calories, you're storing them."

The study found stark gender differences in the mice's response to DDT. Females were at higher risk of obesity, type 2 diabetes, and cholesterol, but in males, DDT exposure did not affect obesity or cholesterol levels and caused only a minor increase in glucose levels.

A high fat diet also caused female mice to have more problems with glucose, insulin and cholesterol but was not a risk factor for males. The sex differences require further research, the authors said.

Fast Foods
Fast foods contain as much as 500 calories per serve which is even higher than the calories that a ....