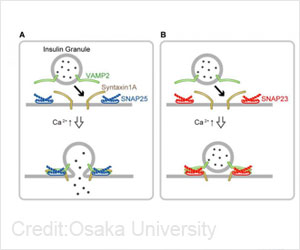 Snap23 gene was knocked out in either β cells or acinar cells; resulting in increased insulin secretion in two mouse models. This new finding suggests that SNAP23 inhibitor could be used as a novel therapy for diabetes.

Osaka, Japan - Movement of secretory molecules, such as hormones and digestive enzymes, out of the cell is known as exocytosis. This process is guided by SNARE proteins, which help the fusion of secretory vesicles with the plasma membrane.

Glycemic control in type 2 diabetes is achieved with oral diabetic medications. Combination drugs and insulin therapy is sometimes required.
Advertisement
‘SNAP23 inhibitors could be used as a novel treatment for diabetes by increasing insulin secretion.’
Tweet it Now

Thirty-eight human SNARE proteins have been identified, each with its own tissue expression and intracellular localization. One such SNARE, SNAP25, is particularly well characterized, being involved in the release of neurotransmitters as well as insulin secretion from pancreatic β cells. The closely related SNAP23 protein promotes vesicle fusion in many nonneuronal cells, including pancreatic cells, although its exact role depends on the cell type. The pancreas has both exocrine (digestive enzyme secretion through ducts) and endocrine (hormone secretion into the blood) functions, and SNAP23 was known to participate in the endocrine function of pancreatic β cells and the exocrine function of acinar cells in the laboratory. However, the in vivo function of SNAP23 was unknown.


Loss of SNAP23 in acinar cells produced mice with reduced exocytosis of inactive digestive enzymes and lower secretion levels of the enzyme amylase. Conversely, loss of SNAP23 in β cells increased the frequency with which insulin vesicles fused with the plasma membrane, enhancing their secretion. These findings suggested opposite roles for SNAP23 in the endocrine and exocrine pancreas.

Six Staggering Diabetes Facts
Advertisement
Because of the similarity between SNAP23 and SNAP25, the two SNAREs compete with each other for binding to other proteins. However, complexes containing SNAP23 are less stable than those with SNAP25, and less efficient at promoting vesicle fusion with the membrane. The researchers exploited this to show the disruption of SNAP23 enabled more SNAP25-containing complexes to form which enhanced processes, such as hormone secretion, that are reliant on vesicle-membrane fusion.

They screened a library of compounds and identified one, MF286, which bound specifically to SNAP23 but not SNAP25. MF286 was shown to increase insulin secretion both in vitro and in vivo and to improve glucose tolerance by blocking formation of the SNAP23-containing SNARE complex. It also reduced amylase secretion from pancreatic acinar cells, suggesting that it could be used to treat both pancreatitis and diabetes.

The study was reported in The Journal of Cell Biology.