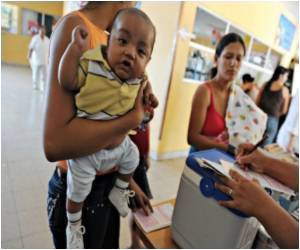 In Kenya, a vaccine against pneumonia was launched to save lives. In developing countries pneumonia accounts for 18 percent of child deaths.

Pneumococcal disease has killed more than a million children under the age of five every year, according to the Global Alliance for Vaccines and Immunisation (GAVI).

"Kenya is the first African country to roll-out this pneumococcal conjugate vaccine which has been specially-tailored to meet the needs of children in developing countries," GAVI said in a statement.


GAVI is a public-private body which brings together UN agencies, the World Bank, philanthropists, the vaccine industry and research agencies to improve children's health through immunisation.

Acid suppressive medications, such as proton pump inhibitors and histamine2 receptor antagonists, could increase the risk of pneumonia, suggests a new study.
Advertisement
It claims to have prevented more than five million deaths since it was created at the World Economic Forum in 2000.

"Routine vaccination is one of the most cost-effective public health investments a government can make and we are counting on our donors to continue their strong backing for our life-saving mission," said Helen Evans, interim CEO of the GAVI Alliance.

GAVI said the launch of its pneumococcal vaccine, now expected to be rolled out in more than 40 countries by 2015, was made possible by an innovative finance mechanism.

Close to three billion dollars from donors allowed the acceleration of production capacity from the two contracted manufacturers, securing the supply of vaccines within a year of their introduction in Europe and the United States and at a fraction of the price charged in rich countries.

"The rapid roll-out of new-generation pneumococcal vaccines shows how innovation and technology can be harnessed, at affordable prices, to save lives in the developing world," World Health Organisation boss Margaret Chan said.

University of Georgia researchers have developed a technique to diagnose a common type of pneumonia within minutes.
Advertisement
Advertisement

Legionnaires disease is a severe form of pneumonia caused by a type of bacteria. The infection is likely to ...

ARDS is a lung condition where the patient suffers from sudden breathlessness, low blood oxygen levels and ...