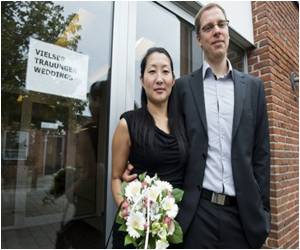 A major clue in our DNA is being found out by researchers that reveals what makes some people more prone to wedded bliss or sorrow than others.

UC Berkeley psychologist Robert W. Levenson, senior author, said that an enduring mystery is, what makes one spouse so attuned to the emotional climate in a marriage, and another so oblivious?

Specifically, researchers found a link between relationship fulfillment and a gene variant, or "allele," known as 5-HTTLPR. All humans inherit a copy of this gene variant from each parent.


Study participants with two short 5-HTTLPR alleles were found to be most unhappy in their marriages when there was a lot of negative emotion, such as anger and contempt, and most happy when there was positive emotion, such as humor and affection.
Advertisement
Participants in the study belong to a group of 156 middle-aged and older couples whose relationships Levenson and fellow researchers have followed since 1989.

Every five years, the couples have come to UC Berkeley to report on their marital satisfaction and interact with one another in a lab setting while researchers code their conversations based on facial expressions, body language, tone of voice and topic of discussion.

More recently, 125 of the study participants provided DNA samples, and researchers matched their genotypes with their levels of marital satisfaction and the emotional tenor of their interactions in the lab setting.

For spouses with two short 5-HTTLPR alleles, who made up 17 percent of the spouses studied, researchers found a strong correlation between the emotional tone of their conversations and how they felt about their marriage.

For the 83 percent of spouses with one or two long alleles, on the other hand, the emotional quality of their discussions bore little or no relation to their marital satisfaction over the next decade.

The study has been published online in the journal Emotion.

7 Year Itch Splits Gay Marriages too
As in heterosexual marriages, divorces are getting common in gay marriages too. Statistics show a .....