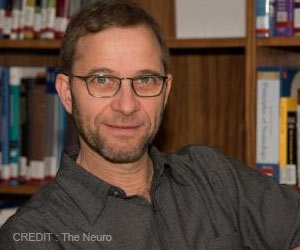 Multiple sclerosis is a nervous disorder which affects the brain and the spinal cord. Ocrelizumab drug has been shown to reduce attack and new symptom progression in multiple sclerosis (MS) patients.

Three studies conducted by an international team of researchers, which included Amit Bar-Or and Douglas Arnold from the Montreal Neurological Institute and Hospital of McGill University, have discovered that ocrelizumab can significantly reduce new attacks in patients with relapsing MS, as well as slow the progression of symptoms caused by primary progressive MS.

In one study, 732 patients with primary progressive MS were randomized on a 2:1 ratio to receive either ocrelizumab, a humanized monoclonal antibody that depletes CD20+ B cells, or a placebo.

Multiple sclerosis is treated with drugs that modify the course of the disease, suppress immunity and relieve symptoms.
Advertisement
Patients given ocrelizumab were also found to have fewer new brain lesions and less brain volume loss than those given the placebo.

Researchers also tested ocrelizumab in two separate studies of patients with relapsing remitting MS, one a group of 821 and the other 835. In both studies, patients were randomized on a 1:1 ratio to receive either ocrelizumab or an already established treatment for relapsing MS: subcutaneous interferon-beta, injected three times weekly. Compared to the placebo, relapse rates in patients given ocrelizumab were 46-per-cent lower in one study and 47-per-cent lower in the other. Ocrelizumab was found to reduce the risk of disability progression after 12 weeks and 24 weeks, and reduced the number of new brain lesions.

"The results in patients with relapsing remitting MS not only demonstrate very high efficacy against relapses, but also underscore the important emerging role of B cells of the immune system in the development of relapses," says Bar-Or. "While the results in patients with primary progressive MS are more modest, they nonetheless represent the very first successful trial in such patients, a breakthrough as primary progressive MS now transitions from a previously untreatable condition to one that can be impacted by therapy. It is an important step forward in the field."

Autoimmune disorders occur when the immune system fails to recognize the body as self and attacks ...

Pork is one of the most popular and widely consumed of all red meats, but how healthy is it? Find out whether ...

Called also the kissing diesase, Mononucleosis is an infectious disease due to infection with the Epstein ...

Optic neuritis is acute inflammation of the optic nerve. Optic nerve connects the eye to the brain and ...
This site uses cookies to deliver our services.By using our site, you acknowledge that you have read and understand our Cookie Policy, Privacy Policy, and our Terms of Use  Ok, Got it. Close
×