Written by Madhumathi Palaniappan
Medically Reviewed by The Medindia Medical Review Team on November 7, 2016 at 11:31 PM 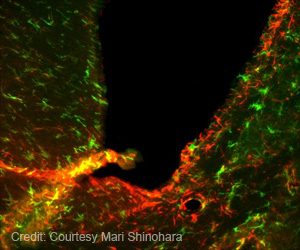 A recent research study from Duke University has revealed alternative treatment options for Multiple sclerosis. Scientists studied the effect of multiple sclerosis in mice and defined the biological mechanisms which would lead to the non responsive form of the disease.

The recent study aimed to identify new drugs for multiple sclerosis treatment when other treatment options like interferon-beta drug fails.

Multiple Sclerosis
Multiple sclerosis can be a severely disabling autoimmune disease that affects the myelin or insulating layer of the nerve fibers and typically has remissions and relapses
Advertisement
‘Finding the biological mechanism behind drug resistant multiple sclerosis shows new hope in diagnosis and treatment options for the disease.’

Multiple Sclerosis is a nervous disorder which affects the spinal cord and the brain. It is found to damage the myelin sheath which covers and protects the nerve cells.


This damage may lead to various cognitive problems, disturbances in the vision, coordination difficulties and muscle weakness.

Multiple sclerosis patients depend on interferon-beta drug to avoid the neurological symptoms and flare ups of the disease in the past 15 years. However the drug is found to be ineffective due to its cost and flu-like side effects.

Treatment of Multiple Sclerosis - Oral Medications or Tablets
Two oral drugs have been approved and a number of drugs are undergoing clinical trials for the treatment of multiple sclerosis.
Advertisement
Mari Shinohara, associate professor of immunology at Duke said, "The study shows a really clear molecular mechanism that may explain why some people do not respond to interferon-beta treatment."

"We've found what makes a difference in the response." she added.

The study was published in the Journal Nature Neuroscience this month.

Scientists are still finding out the biological mechanisms that lead to the neuronal damage of multiple sclerosis.

Previous study in 2012 found interferon-beta to work by inhibiting NLRP3 inflammasome ( giant immune protein complex). This inflammasome plays a major role in triggering the immune response which makes multiple sclerosis patients sick. They even found that the treatment was ineffective in some patients.

Current study aimed to figure out the reason that triggered the second form of the disease.

Shinohara and team found two specific receptors called CXCR2 and LTBR, in the center to the development of disease in patients for whom interferon-beta did not work. They also found that treating the mice with a molecule that is capable of blocking these receptors were found to reduce the symptoms.

Simon Gregory, a professor of medicine said, "We identified individuals who were not responsive to the interferon-beta treatment, and looked at their CXCR2 and LTBR relative gene expression levels."

"We found them to be upregulated," meaning they were producing more of the receptors, he said.

Targeting CXCR2 and LTBR receptors may be helpful in treating multiple sclerosis. This would also help doctors in identifying the treatment options for patients.

Li said, "This new model gives us opportunities to explore a different disease mechanism that has been elusive to the field thus far."

"I believe it will have a large impact on both the basic and translational research on multiple sclerosis." he added.

Advertisement
<< New Biomarkers Found for Huntingtons Disease
Age at Cancer Diagnosis may Affect the Risk of Death from He... >>

Multiple Sclerosis is a Tough Disease to Manage but It is Not Impossible
On World MS Day, a cheerful 37-year-old single mom in India recounts her personal journey of living with Multiple Sclerosis.