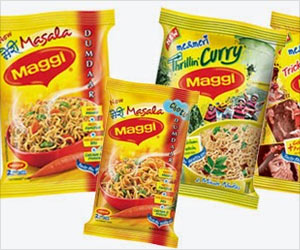 Amid nation-wide scrutiny over more-than-permissible limits of lead found in Maggi Noodles, Nestle India has decided to withdraw Maggi noodles in the country. However, the company continued to maintain that it was safe and would be back on store shelves soon.

The company said in a statement in the early hours on Friday, June 5, 2015, "Maggi noodles are completely safe and have been trusted in India for over 30 years. The trust of our consumers and the safety of our products is our first priority. Unfortunately, recent developments and concerns about the product have led to an environment of confusion for the consumer, to such an extent that we have decided to withdraw the product off the shelves, despite the product being safe. We promise that the trusted Maggi Noodles will be back in the market as soon as the current situation is clarified."

Food and Consumer Affairs Minister Ram Vilas Paswan says if a company violates standards and misleads the consumer, the regulator cannot be responsible for it.
Advertisement

The Governments of Gujarat, Delhi, Kerala and Jammu and Kashmir had banned Maggi for 15-30 days and several others had called for tests on the popular noodles after a batch in a small town in Uttar Pradesh was allegedly found to contain higher-than-permissible levels of lead. Following the concerns, a host of retailers, from neighborhood shops to larger ones like Big Bazaar and WalMart, withdrew it from their shelves.

With Consumers Wary, Maggi Noodles Off Store Shelves in Several Parts of India

Amid growing health concerns, the sale of Maggi instant noodles has taken a hit with grocery shops and chains like Big Bazaar removing it from their shelves.
Advertisement

There is no testing facility in Bihar. So samples of Maggi noodles from across the state, including Patna, and have been sent to labs in Kolkata.

Samples of Maggi noodles and some other food items have been collected from West Bengal and sent to the industrial testing laboratory National Test House.
Advertisement