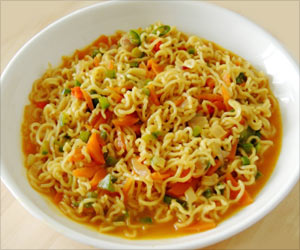 Maggi instant noodles has been hounded by controversy after media reports surfaced on the alleged presence of harmful contents in the popular snack. In a new development, as many as 16 samples of Maggi noodles have been collected in Bihar and sent to a Kolkata laboratory for testing, reported an official of state Directorate of Health. A Muzaffarpur district court in Bihar also directed authorities to file an FIR against officials of Maggi noodles-maker Nestle and Bollywood actors Amitabh Bachchan and Madhuri Dixit, the brand ambassadors of the food item.

The official from the Drug Controller's office said, "We have collected 16 samples of Maggi noodles from across the state, including Patna, and sent them to Kolkata since there is no testing facility in Bihar. The results of the samples are expected on Thursday. Only after the results are in, the Bihar government will decided whether to ban Maggi, as done by other states or take any other suitable action in this case."

Ordering an immediate halt to the sales of Maggi noodles at the state-owned Supplyco, Anoop Jacob instructed officials to return the noodles to the supplier.
Advertisement

The Food Safety and Standards Authority of India (FSSAI) has also tested Maggi samples collected from various states in the wake of Uttar Pradesh Food Safety and Drug Administration (FSDA) finding monosodium glutamate and lead in excess of the permissible limits in the instant noodles.

After receiving the results and looking into contents, if we find the samples don't conform to food safety norms, we will take action, say officials.
Advertisement

Health Minister of Karnataka is testing all types of noodles sold in the state. Strict action will be taken on companies if their products fail in the tests
Advertisement
This site uses cookies to deliver our services.By using our site, you acknowledge that you have read and understand our Cookie Policy, Privacy Policy, and our Terms of Use  Ok, Got it. Close
×