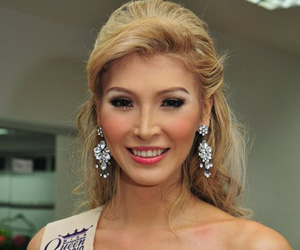 Transgendered beauty queen Jenna Talackova, aged 23, was kicked out from Miss Universe Canada beauty pageant, after the pageant organizers became suspicious that the contestant was not a 'naturally born female' as stated in her registration form.

The rules of the pageant state that each contestant must be a 'naturally born female'. Jenna describes herself as having identified as a woman when she was 4-years old. She began with hormone therapy at the age of 14-years and had her reassignment operation at 19-years. Jenna has previously represented Canada at Miss International Queen (a transsexual beauty pageant in Thailand) where she was finalist.

Seven transgender women showcased their skills through their original documentaries in a venture that was jointly presented by 'Project Kalki' and The Alliance Française de Madras.
Advertisement


Despite her pleas to stay in the pageant she was pulled from the contest that same day. Jenna is looking forward to see a lawyer next week.

Mr. Davila said, "She feels like a real girl and she is a real girl. She didn't expect people to question it. She was hoping we could put her back in the competition, but the rules are very clear and there's no way we can go back on it.

A study on Transgender population in Chennai, reveals a strong need for both Psychologists and Physicians to first understand and accept transgender persons and then improve their general wellbeing.
Advertisement
<< Impact of Live Donors Age on Health of a Transplanted Kidne...
New Mechanism of Prostate Cancer Cell Metabolism Identified >>

Kanchana, is a young transgender woman, who recently showcased her documentary 'Nambikkai' meaning Hope. The documentary is about the talents and the human nature of people who are differently abled.

Is there a shift in social attitude towards homosexuals and HIV infected people in India. Find out about this and other aspects in an exclusive interview with Anjali Gopalan of Naz Foundation, Delhi.
Advertisement
News A-Z
A B C D E F G H I J K L M N O P Q R S T U V W X Y Z
What's New on Medindia

How to Reduce School Bag Weight - Simple Tips Sanatogen Accident and Trauma Care Loram (2 mg) (Lorazepam) Selfie Addiction Calculator Turmeric Powder - Health Benefits, Uses & Side Effects Vent Forte (Theophylline) A-Z Drug Brands in India Noscaphene (Noscapine) Find a Hospital
This site uses cookies to deliver our services.By using our site, you acknowledge that you have read and understand our Cookie Policy, Privacy Policy, and our Terms of Use  Ok, Got it. Close
×