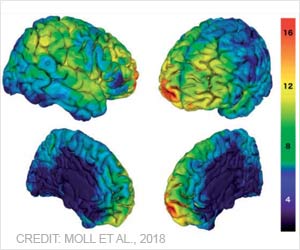 The mechanism behind altruistic behavior among Vietnam war veterans with brain lesion has been identified, reveals a new study.

There are two war veterans, both with penetrating traumatic brain injury (TBI) caused by a gunshot. One of them tends to donate his own money to societal entities he believes in, and the other one punishes institutions that don't represent him.

The answer for these behavioral differences rely on brain areas, that after being damaged during the Vietnam War are no longer working as they are supposed to. In order to elucidate these mechanisms, neuroscientists investigated altruistic behavior - actions that benefit others - in Vietnam veterans. The study was published in Brain.


For at least 150 years, we know that TBI can change several domains of behavior, impairing social behavior or memory, for instance, depending on which brain areas have been damaged. However, mapping the relation between brain areas and behavior can be tough, especially for complex behavior such as altruism. War veterans constitute a unique opportunity to reveal causal relationship between how specific brain areas are involved in social behavior.
Advertisement
This study - part of an initiative that investigates the brain of war veterans since the 1980's - included 94 war veterans with penetrating TBI and 28 controls that also served in combat in Vietnam but had no history of brain injury.

All participants had their brains examined with a Computed Tomography (CT), a non-invasive method that allows investigation of brain damage.

Also, veterans participated in an altruistic decision task in order to capture their intuitions of justice and morality. In this test, each participant was required to donate or punish 30 charitable organizations involved in salient societal issues, such as abortion and gun control. Each decision (either donate or punish) costed them $1, while avoiding them resulted into savings.

In the altruistic decision task, donate and punish are typically altruistic decisions: they involve giving away from their own money in order to benefit third parties. "This test is different than others because it allows us to go deep in their moral intent, since they donate or punish to what they believe is right or wrong", explains Ricardo de Oliveira-Souza, neurologist from D'Or Institute for Research and Education and author of the study.

Altruism in the brain

When linking participants' performance on the test to their brain lesions, scientists found out that those veterans who have made more decisions to punish showed bilateral lesions in the dorsomedial prefrontal cortex. On the other hand, less punishment was associated with lesions in the left temporo-insular and right perisylvian cortices.

However, decisions to donate to a given organization were associated with lesions in other areas of the brain. Increase in donations was linked to bilateral lesions in the dorsomedial parietal cortex, while decrease in donations was observed in the veterans who had suffered damage in posterior parts of the right hemisphere, including superior temporal sulcus and middle temporal gyrus.

"Our findings reveal that we have two distinct brain circuits that come into action under a moral situation: one of them punishes, the other one donates", highlights Oliveira-Souza.

Previous studies have pointed to the importance of these brain areas to determine the sense of morality and justice towards individuals or social groups.

According to the authors, the present study reinforces the notion that altruistic decisions emerge from complex cognitive process that come into action during a moral decision, for instance if one is for or against civil rights.

"We hope that learning more about the brain mechanisms of altruistic behavior and its related social behaviors we can promote the positive social behaviors that families desire; particularly in patients under rehabilitation for different forms of neurodegenerative disorders or brain injury", says Jordan Grafman, from Brain Injury Research Program, Shirley Ryan AbilityLab, Chicago, USA.

In the future, the authors expect to evaluate younger people and women with the altruistic decision task in order to investigate whether there is any differences in the brain circuits of morality related to sex and age.