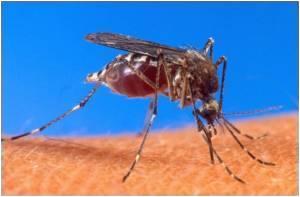 Researchers at Vanderbilt University claim that the malaria mosquito apparently relies on a battery of different types of odour sensors to mediate its most critical behaviours, including how to choose and locate their blood-meal hosts.

In a new study, researchers have characterized two families of molecular odorant sensors in Anopheles gambiae, the mosquito responsible for the majority of human malaria transmission.

Intensive research on insect olfaction over the past decade has revealed many details of the cellular and molecular basis of odor recognition.


Considerable attention has been focused on a diverse family of odorant receptors (ORs) that are expressed throughout the antennae and other head appendages and which drive the responses to a variety of volatiles.

Mosquito-borne diseases, like malaria, filaria, dengue, etc are common in places conducive of mosquito breeding. Swamps, ponds and stagnated drainage provide optimal breeding ground for mosquitoes.
Advertisement
Combining gene-silencing techniques with a new behavioural assay, the study confirms that one of the modes of action of DEET, the most commonly used commercial insect repellent, is based on the activation of a specific OR family member.

However, ORs alone do not appear to be able to account for the breadth of mosquito olfactory sensitivity as several potentially important human-derived odors such as ammonia, butylamine and lactic acid, have consistently failed to activate mosquito ORs.

The experiments described in the paper provide striking new evidence that A. gambiae has a second set of olfactory sensors that are fundamentally different from its primary sensors.

For example, the new study indicates that butylamine sensation requires a member of another family of unrelated molecular sensors known as Ionotropic Receptors (IRs) that have recently been described in the fruitfly Drosophila melanogaster.

Thus, two distinct olfactory signaling pathways are active in mosquitoes: one is OR-dependent and accounts for responses to DEET as well as a large number of general odorants, while the other is OR-independent and may be responsible for sensitivities to a specialized subset of odorants, such as amine containing compounds.

There is a good chance that this new set of receptors may be specifically tuned to detect a number of the odorants given off by humans, adds co-author R. Jason Pitts, a graduate student at Vanderbilt.

"If this is the case then it is quite likely that it will play a critical role in attempts to develop improved lures and repellents to control the spread of malaria," he said.

The study will be published next week in the online, open access journal PLoS Biology.

Virus Could Behave Like a 'Late-life-acting' Biopesticide Against Malaria

A virus that occurs naturally in mosquitoes could behave like a late-life-acting insecticide and destroy older adult mosquitoes that have a big role to play in malaria transmission.
Advertisement

India is battling record levels of malaria infection in Mumbai, health officials said Friday, with as many cases in the first half of the year as in the whole of 2009.
Advertisement