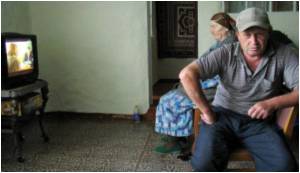 The days of the couch potato seem numbered as as large numbers of TV viewers are now taking to the internet to watch their favourite shows online without having to be forced to waiting for them in front of the Idiot Box.

A study has found that more than one in three people now view their favourite programmes over the web.

'Exercise Pill' for Couch Potatoes In the Offing

Good news for couch potatoes: Researchers in Houston are testing a drug that mimics the effects of exercise.
Advertisement

And when it comes to students, this figure almost doubles.


The study, by online TV service SeeSaw.com and the Radio Times, identified changes in the way people view their programmes.

"The couch potato is dead, the age of the hunter-gatherer is nigh," Sky News quoted Ben Preston, editor of Radio Times, as saying.

In what could be a dream job for the majority of the population, a weight loss company is advertising for a professional "couch potato" in order to test its upcoming product.
Advertisement
"Technology means television isn't a passive activity any more. We hunt down what we want to watch," he added.

SeeSaw's John Keeling said: "Viewing across the board is in robust health but scratch the surface and a quiet revolution is taking place... a whole new generation of TV fans is enjoying these shows online."

The study found that only 29 percent of students watched shows mainly on live TV, while 56 percent said they watched online.

Just over a third of all those who took part (34 percent) said they now watched their favourite shows online.

Viewers told the survey they want to see more drama and documentaries rather than reality and celebrity shows.

A total of 44 percent said 'Big Brother' was the show they were most likely to avoid, with the X Factor landing 6 percent of the poll.

The British government has come up with a 1-million-pound scheme, in which kids as young as four will be made to fight the flab with a team of 1,000 lifestyle coaches.
Advertisement
<< Birth Past-Full Term Linked to Higher Cerebral Palsy Risk I...
Malaria Mosquitoes Use Different Odour Sensors to Satisfy B... >>

Turmeric Powder - Health Benefits, Uses & Side Effects Post-Nasal Drip The Essence of Yoga Find a Hospital Accident and Trauma Care Nutam (400mg) (Piracetam) Hearing Loss Calculator A-Z Drug Brands in India Calculate Ideal Weight for Infants Vent Forte (Theophylline)
This site uses cookies to deliver our services. By using our site, you acknowledge that you have read and understand our Cookie Policy, Privacy Policy, and our Terms of Use