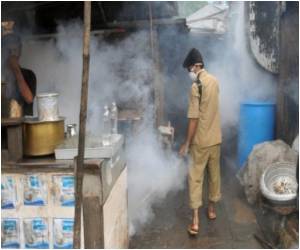 India is battling record levels of malaria infection in Mumbai, health officials said Friday, with as many cases in the first half of the year as in the whole of 2009.

Authorities in the financial hub have drafted in experts from Medecins Sans Frontieres to tackle an outbreak which has seen nearly 4,000 cases this month alone, with the most virulent form of the potential killer having struck 10 to 15 percent.


The first six months of this year saw more than 14,700 cases in Mumbai -- nearly as many as for the whole of 2009 -- while a sharp rise in patients since the start of the monsoon rain in July has left hospitals struggling to cope.

If untreated, it can quickly become life-threatening by disrupting the blood supply to vital organs, according to the World Health Organization.

Since August 1, just over 3,800 people have tested positive -- mostly for the non-lethal vivax strain -- and there have been 28 deaths, according to figures released Friday by the Brihanmumbai Municipal Corporation.

MSF teams working on an HIV treatment scheme in Mumbai are providing 100,000 diagnostic kits and 3,700 treatment kits to 64 health centres. They will also train health workers to identify and treat the disease.

Tiago Dal Molin, the group's project co-ordinator in Mumbai, said in a statement: "It is crucial that health staff can give a correct diagnosis so that patients can be treated appropriately.

"The diagnostic tests that we provide are reliable, easy to use and require just one drop of blood to give results."

Outbreaks of malaria and water-borne diseases are common in some areas of overcrowded Mumbai, which is home to an estimated 18 million people, more than half of them in slums.

A.C Dhariwal, director of the National Vector Borne Diseases Control Programme, was quoted as saying by the Indian Express last month that Mumbai had the highest number of malaria cases and deaths out of India's big cities.

Public health officials have expressed concern that Mumbai's many construction sites have become a haven for mosquitoes that spread the disease because they breed around stagnant water.

They suggested that 200,000 construction workers, many of them migrants who sleep on site, are at risk of infection.

A new study says that preventative treatment antibiotics in people living in areas with intense malaria transmission has the potential to act as a 'needle-free' natural vaccine against malaria.
Advertisement
Advertisement