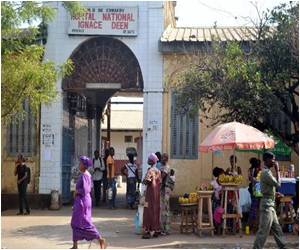 The outbreak of Ebola fever in West Africa came as bad news for gourmets in Ivory Coast, as it brings respite from the hunter to species sought out for tasty meat, but feared to carry the disease.

Late in March, Health Minister Raymonde Goudou Coffie called for her compatriots to stop eating porcupines and agoutis, which look like large river-rats, "until we can be sure there are no risks".

Bushmeat is known to be a vector of Ebola, the alarming haemorrhagic fever that has claimed at least 122 lives in Guinea, according to a UN World Health Organisation toll on April 17. Liberia, meanwhile, reports 13 deaths.


Hunters and restaurant owners in the central Ivorian town of Bouake are upset that clients have begun to steer clear of the strong taste of the agouti, a beast with a long snout and brown fur that can reach half a metre (1.6 feet) in length.
Advertisement
Last week, the minister's recommendation was still going unheeded or ignored by some traders and hunters in Bouake's main bushmeat market. One hunter openly carried a dead rodent.

But such scenes are swiftly becoming a thing of the past. An official ban on bushmeat -- including antelopes, chimpanzees and porcupines as well as agoutis -- has been enforced and a week later, the Bouake market was empty.

State officials from the water and forestry service and in the health sector are patrolling the whole country in search of offenders. They recently burned 200 kilos (440 pounds) of smoked game found in the capital Yamoussoukro.

The stakes are high. Wild animals are carriers of often deadly haemorrhagic fevers, including Ebola for which there is no medical cure. The fruit bat has been singled out as a likely vector in the west African outbreak.

People subsequently contaminate each other by direct contact with blood, bodily fluids and the tissue of infected patients, including dead ones during their burial.

The current strain of Ebola kills 90 percent of its victims and suspect cases have been reported in Sierra Leone and Mali, while Senegal has closed its border with Guinea.

Fear of the disease runs high in Ivory Coast, another of Guinea's neighbours, though no cases have yet been reported. People have begun to listen to official warnings and instructions.

"We like agouti very much, but we would rather save our lives," said Ernest, a man in his 30s. "As an Ivorian, I appreciate this meat. But with the risk of Ebola, I've changed, I don't eat any more," Kassoum agreed.

Not everybody plays by the rules. A restaurant owner, who asked to remain anonymous, said she had established a code with some of her most loyal customers, hardened eaters of bushmeat.

"When they come in, those who can't do without agouti give me a signal in secret and I make sure that other customers believe I am serving them beef," she explained.

Adele Coulibaly, 48, whose restaurant used to specialise in game, has converted to beef and fish, but in the process she has lost customers and income. She is sceptical about the government's recommendations.

"When I was born, my mother was in this line of work and there was never any disease," she said. "Bushmeat has nothing to do with Ebola."

On the other hand, the restrictions imposed by the Ebola outbreak could help wildlife to recover. A ban of game hunting has been in force since 1974, but remained largely ineffective because of the popularity of the meat.

Agoutis, antelopes, chimpanzees, porcupines and other species are all in danger of extinction in Ivory Coast, but today they have at least a few weeks' respite.

Ironically, "Ebola is a good thing for the preservation of wildlife," said Colonel Jerome Ake, the Yamoussoukro regional director for water and forestry.

A break in hunting will also benefit the natural environment, since hunters flush out game by starting large brush fires, which they are not always able to keep under control.

In the past 10 years, such blazes have killed 120 people and destroyed more than 5,000 square kilometres (1,900 square miles) of forest and other land, a region twice the size of Luxembourg. But in these days of Ebola, fewer fires are likely to be started.

Source: AFP
Advertisement
<< Image Like That of Jesus Appears on Pancake in California C...
Construction Slows Due to Conflict and C. Africa 'Sandfishe... >>

Ebola Has Killed 61 in Guinea Since January: Report
The government said the Ebola virus has claimed 61 lives in Guinea out of 109 laboratory-confirmed ....

Emergency Moves Against Ebola Onslaught in Guinea Unveiled by the WHO
A raft of emergency measures have been launched by the World Health Organization in the Guinean ......

Mali Clear of Deadly Ebola Epidemic
Mali reported on Tuesday it was clear of the Ebola epidemic, a disease suspected to be behind ......