Construction Slows Due to Conflict and C. Africa 'Sandfishers' Fear for Livelihood 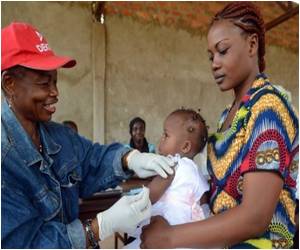 Months of conflict have brought near despair in Central African Republic, shattering hopes of Sinclair and his comrades who have long dived deep into the Oubangui river to dig up sand for the building industry.

"We're in a state of war now, the time of destruction," the brawny young man said on the bank of the river that flows past the capital Bangui, which has been abandoned by many residents for fear of attacks. "But we live off construction. So business is slow, really slow."

Alongside three other "sandfishers", as they're called, Sinclair tossed heavy spadefuls of sand brought up in buckets from the riverbed into a skip on the back of a truck.


The sand divers hold their breath during their plunge down to the bottom of the river anything between 10 and 40 times a day, constantly facing risks of damage to their health or even death by drowning.
Advertisement
In the dry season, the Oubangui runs at about five metres (16.4 feet deep), but during the rains its swollen waters can rise up to 12 metres, making for a very deep, dangerous dive.

The workers, who also collect valuable gravel, are in their 20s, aged 30 at most. The job they do lowers their life expectancy, but they are inhabitants of a deeply poor and troubled nation classed far down the UN's Human Development Index.

Poverty and suffering have been greatly worsened across the country of 4.6 million people by the conflict which broke out after Seleka rebels mostly from the Muslim minority seized power in Bangui for 10 months in May last year.

Thousands of people have been killed and hundreds of thousands of townspeople and villagers have fled their homes.

The former colonial power France and the African Union have together deployed more than 7,000 peacekeeping troops. The United Nations plans to put 12,000 men on the ground from September.

The "sandfishers" have stayed put. They come from the Lagbachi ethnic group which lives close to the river on the border with the Democratic Republic of Congo, like neighbouring Yakoma people who live by catching fish.

The job runs in Sinclair's family. "My father already did this, and even his father before him." But the young man owns no dug-out boat, so he hires himself out by the day, like other youths.

If he manages with the help of a companion to fill six or seven boatloads during the course of a day, that is considered a fine catch, which earns Sinclair about 2,500 CFA francs ($5.2, 3.8 euros).

Sinclair works for Faustin Madungou, a man in his 30s who owns a couple of boats. The bigger canoe can hold 60 bucket loads of sand and gravel, while the small one can take 25 on each trip.

These dug-outs are built by villagers living in the forest. The ones made of hard redwoods last for between 10 and 15 years, while canoes built of lighter lumber are good for three or four years of use.

Barthelemy Mikiliya, who is older than most, possesses his own boat along with a family tradition. "My father taught me," he said, watching divers disembark from his vessel.

The young men silently balanced baskets weighing 30 kilogrammes (66 pounds) on their heads as they scrambled with difficulty up the riverbank to dump their loads of sand on to a pile intended for a buyer, who would in turn sell the cargo to the few remaining clients.

Sinclair's left cheek was swollen by a sore, but he had no money to treat it properly though every dive inflamed the wound.

Barthelemy explained that sand divers are susceptible to a range of medical problems on top of malaria. The physical strain of the work can cause hernias, while eyes and ears can become fragile and diseased. "People dive wearing nothing to protect their ears, eardrums burst," he said.

"There are also problems of drowning," he added. "Not all the divers know how to swim."

The canoes are sometimes steered a long way across the broad river to the shore of the DRC. As they return heavily laden, one clumsy movement or unexpected wave can capsize the boat.

"If a canoe comes back with too light a load, the boss will send the divers out to fetch more bucket loads before allowing them to land," Barthelemy.

The toughest moment for the divers is at the bottom of the river, when they have filled their buckets and must push up back to the surface through the current. "Our work calls for a lot of energy," Sinclair said. "And now, when people are not building, there is not enough money to eat well and no energy."

Woes of Central Africa's Child Soldiers Struggling to Re-adapt
A child no older than ten clutches a rifle, struggling to stay upright in his freshly-pressed ......

Organic Farming Stalemate Killing Central Africas Food Security Plans
The polarized debate over the use of organic and inorganic practices to boost farm yields is ......

Cholera Epidemic Looms Large in West, Central Africa
The UN children's agency warned about one of the worst cholera epidemics looming large in the west ....