In Nepal, Women Fight Age-old Custom of Segregation During Menstruation 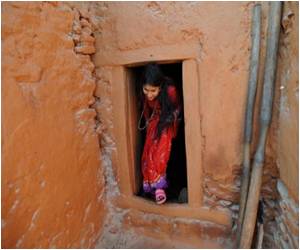 In a tiny town in Nepal's Achham district, women who are subjected to 'chaupadi'- an age-old custom of isolating women from their families during menstruation, are fighting for their rights.

For generations in the town, menstruating women have slept outside of their homes, in small sheds or in the family stable. The women are considered impure and treated as untouchable, so they cannot enter the house or touch communal water or food, reports the Christian Science Monitor.

An activist from Samabikas - a local organization pushing to abolish chaupadi in the district and elevate women's status - calls it a social crime in terms of women's rights.


According to a 2011 estimate by the government's Women's Development Officer in the district, some 95 percent of women in Accham practice chaupadi.
Advertisement
One of the Samabikas' success stories is a village called Bhageshwar. Samabikas makes the declarations only after the villagers have stopped going to the sheds each month.

In Bhageshwar, the catalyst for change came from a 40-year-old mother, who while constructing a new house six years ago, built a separate room for when she has her period. Now each month she sleeps apart from her husband and the family's sacred prayer space. Here she is warm and safe from feared snakes or drunk passersby.

In the intervening years, the community saw that the animals weren't dying, the fields continued producing. Now almost no families in the village send their women to sheds during their period.

Swine Flu Outbreak in Nepal
A strain of swine flu virus has been detected in Kathmandu and three other districts outside the ......

Modernity Is Entering Nepal
Life appears untouched by modernity -- but change is coming in the Nepalese hamlet of Simen, five .....

No Attention To Nepal's 'First' Global Film Star
The remote and pristine villages of the world's tallest mountain range to the West was opened up by ...