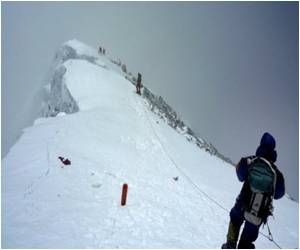 The remote and pristine villages of the world's tallest mountain range to the West was opened up by Oscar-nominated "Himalaya".

But while the director Eric Valli and co-stars have gone on to land lucrative work in film and television, the movie's ageing star is penniless and struggling to survive in one of the poorest and harshest landscapes on earth.

Nepal urges tourists to take precautions against cholera. 13 people died in an outbreak in the remote west of the country.
Advertisement

"It's like the way I lived before the film and now is the same. Nothing has changed," 71-year-old Thinle Lundup Lama told AFP at a religious festival in the mystical, culturally-Tibetan land of Upper Dolpa in northwest Nepal.


"Now my face is so familiar, I'm so famous in Dolpa, that a lot of the tourists who come to visit take pictures of me. They are the ones who benefit out of my face but I am just the same."

A bunch of disciplined nuns arrange themselves into lines around a golden Buddhist shrine on a hot, cloudless morning on a hillside on the outskirts of Kathmandu.
Advertisement
"Himalaya" is the story of villagers who take a caravan of yaks across the mountains, carrying rock salt from the high plateau down to the lowlands to trade for grain.

The movie, the first from Nepal to be nominated in the Best Foreign Film category at the 72nd Academy Awards in 2000, used a cast made up almost entirely of real farmers, local lamas, and village chiefs.

Lundup plays Tinle, an irascible elderly chieftain of a yak-herding and farming village in a power struggle with Karma, a hot-headed upstart who would like to take his place, against the backdrop of the annual caravan.

Filmed in widescreen Cinemascope, "Himalaya" won worldwide plaudits for its intoxicating depiction of the lonely grandeur of the landscape.

Lundup, who had lived a simple life in a stone house overlooking the remote village of Saldang, a week's walk from the nearest town, found himself catapulted into the limelight.

Critics recognised the charismatic widower as being the film's real stand-out, with the Chicago Tribune hailing his "especially impressive" depiction of a chieftan "whose inspirational power over his men would have given John Wayne a run for his money".

But Lundup says he was not chosen to travel to the Oscar ceremony and was unable to turn his new-found fame into a career or to promote the film, which eventually lost out to the Spanish feature "All About My Mother".

"During the time when I was acting my salary was only 300 rupees ($3.50) a day. The movie went on for nine months, so my salary for the entire project was only 90,000 rupees," said Lundup, speaking through an interpreter.

"But everyone said 'Oh, Thinle's getting big money' because no one knew the value of money at that time."

Lundup's co-star Lhakpa Tsamchoe, 40, an Indian actress of Tibetan descent, had already had her big break before "Himalaya", starring alongside Brad Pitt in the 1997 Hollywood blockbuster "Seven Years in Tibet".

Gurgon Kyap, another member of the cast, moved to Paris where he has landed TV and film work.

But Lundup was determined to remain in Nepal, hoping to carve out a film career in his home among the mountains, deep canyons and swollen rivers of Upper Dolpa.

He appeared in a music video by the popular Nepali dance-folk band Nepathya in 2003. But then the work dried up.

"After the movie I really wanted to act but there was no big investor, no big movie that happened in Dolpa. There were small projects, like TV channels who used to come and interview me."

Life is hard for the people of Upper Dolpa, one of the world's poorest places where sanitation is a luxury, food is always scarce and the punishing summer heat gives way in autumn to a harsh, freezing wind which chills the bones.

Valli, an acclaimed National Geographic photographer, author and film-maker who has lived in Nepal since 1983, spent nine months filming in the region and boasts close friendships with the villagers he cast in the movie.

Lundup talks proudly of how Valli has spent tens of thousands of dollars helping him with medical bills for tuberculosis and cancer.

Without exception, locals talk positively about the effect of the movie, known locally as "Caravan", stressing that it showcased their beautiful, rugged landscape to the world and brought in trekkers with their bulging wallets.

Tourist numbers have increased in Upper Dolpa since the turn of the century, but the rise seems unlikely to have been spurred by "Himalaya", with government figures showing visits to the area dropped in the years after the film came out.

Nepal's ten-year Maoist insurgency ending in 2006 seems to have had more to do with the region's new-found popularity, with tourist numbers between 300 and 400 a year now from an average of barely 80 in the last years of the war.

Nevertheless its people seem happy to give Valli the credit.

"No one knew what Dolpa was until Eric Valli made a film called Caravan," said Amchi Namgayal Rinpoche, 44, a senior Tibetan lama who was born in the region.

"After that it was known to the whole world and there were a lot of tourists coming here."

It is the foreign visitors who recognise Lundup, often asking for him to pose for their pictures, he says, while he is largely forgotten by Hollywood and the rest of the world.

"Now I'm retired and I am old, and I don't have any great expectations about life. I just want good food, but because of my health I can't have oily food -- only buckwheat, wheat powder and potatoes," he said.

"And if I want to have a drink I can't have any alcohol. I really want to try continental food but I can't get it here.

"Most of the time I roam here and roam there, walking around and meeting people. I get a lot of visitors but I have nothing much to do."

Launch Of Anti-drug Campaign In Nepal

Launch of a nationwide anti-drugs campaign by Nepal police in collaboration with a non- governmental organization to fight against illegal use of drugs to grassroot level across the country.
Advertisement
<< Use Of EHR Associated With Improvements of Diabetes Patient...
Study Finds Narcissism to be a Critical Trait During Job In... >>

Around 20 children who hope to be the doctors, lawyers and scientists of tomorrow rush out of the gates of one of Nepal's top private schools.
Advertisement
News A-Z
A B C D E F G H I J K L M N O P Q R S T U V W X Y Z
What's New on Medindia

Test Your Knowledge on Lung Transplantation
View all
News Archive
News Resource
News Category
How to Reduce Needle Anxiety in Children? Tobacco Addiction: Here's How to Break the Habit Parents are 'Winging It' on Their Kids' Mobile Use Ankle and Ankle Movements While Riding an Hoverboard Is It Healthy to Let Your Mind Wander?
More News
Sign up for Wellness Consult a Doctor Sign up for Selfcare

Blood Donation - Recipients The Essence of Yoga Sanatogen Find a Hospital A-Z Drug Brands in India Accident and Trauma Care How to Reduce School Bag Weight - Simple Tips Vent Forte (Theophylline) Blood Pressure Calculator Noscaphene (Noscapine)
This site uses cookies to deliver our services. By using our site, you acknowledge that you have read and understand our Cookie Policy, Privacy Policy, and our Terms of Use