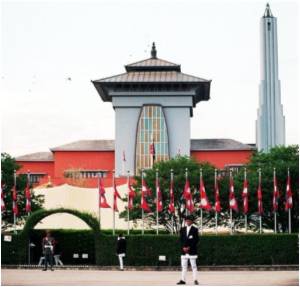 Life appears untouched by modernity -- but change is coming in the Nepalese hamlet of Simen, five days' walk from the nearest town, children pay for schooling with wood or animal dung.

Just two valleys away in Dho Tarap village, business is booming and satellite dishes that beam in American wrestling are set up beside prayer flags as the high Himalayan landscape of Upper Dolpa opens up to the outside world.

The remote and pristine villages of the world's tallest mountain range to the West was opened up by Oscar-nominated Himalaya .
Advertisement

The contrast between the two settlements points to the future for one of the highest inhabited regions on Earth, and local children like Pema Lama are likely to lead lives full of bewildering new experiences.


Pema's parents cannot afford the 3,000-rupee ($35) charge for six months of schooling and, like most of their neighbours, send the children to classes with wood or yak dung which is weighed and accepted in lieu of cash.

Nepal urges tourists to take precautions against cholera. 13 people died in an outbreak in the remote west of the country.
Advertisement
"The school doesn't have much money," says his teacher Sonam Tsering, 26, over salty Tibetan tea prepared on a woodburning stove in the kitchen of Shree Tsering Dolma primary school.

"Students have to bring 50 kilograms (110 pounds) of firewood and if they can't do that then many bring yak and horse dung."

Upper Dolpa, a hidden land of deeply notched canyons and swollen rivers, is virtually sealed off from the rest of Nepal by passes more than 5,100 metres (17,000 feet) above sea level.

The region is marked by high peaks abutting the Tibetan plateau, with trails snaking along high cliffs for farmers and nomadic herders who take their shaggy, black yak south for winter grazing.

Small fields, planted with barley, buckwheat, potatoes and radish are cultivated, but yield is just enough food to sustain families.

Yak, sheep and goats provide milk, butter and meat, and the wool and hides are used for cloth and boots.

Most locals speak a Tibetan dialect called Dolpo, and the literacy rate is about 20 percent.

Pupils study just six months of the year due to the harsh winter, and in summer most also spend weeks with their parents on the hazardous task of harvesting yarchagumba, a wild fungus prized for its alleged aphrodisiac qualities.

Closed to trekkers until 1989, Upper Dolpa is ranked one of the worst places in the world for food security by the UN World Food Program (WFP), due to its inaccessibility and harsh terrain.

But, a few days' walk away, in Dho Tarap village the pleasures and problems of 21st century living are clearly in evidence.

In the comfortable Caravan Guest House, one of a number of hotels springing up in what some claim is "the world's highest village", Jyampa Lama, 42, watches his new flatscreen TV.

He moved to the village, 4,200 metres (13,780 feet) above sea level, 18 years ago to cash in on the nascent trekking trade and increasing number of yarchagumba harvesters passing through the village.

"There are 252 houses here now and maybe five to 10 have televisions. Most people still don't know what is happening in the outside world, or even inside the country. But that is changing," he said.

"A new generation is now going to school, learning Nepali with the help of international donors and learning to keep in touch with the outside world."

Lama said since he bought his television he had been able to keep up with domestic and world news and had been able to invite friends around to watch English Premier League football and WWE Wrestlemania -- a particular favourite.

Upper Dolpa is expected to benefit financially from a further opening up to Western culture with the new Great Himalayan Trail, one of the longest and highest trekking routes in the world, passing right through the region.

SNV, the Dutch development organisation behind the trail, is training locals in villages across its 1,700-kilometre (1,050-mile) stretch to provide services for trekkers and to offer a better selection of cuisine and Western toilets.

But the tourist dollar brings with it dangers of its own, according to Amchi Namgayal Rinpoche, 44, a senior Tibetan lama who has spent his life in Dho Tarap.

"People have a bit of money now and craftsmanship is slowly disappearing. They used to craft thanka paintings here and even make their own shoes," he said.

Television, he says, is a mixed blessing as the images of Western culture can be corrupting.

"It's OK to see the outside world," said the monk, who watches Nepali programmes on his own television.

"But our people need to retain their culture and take the good examples from the outside world, not the bad ones."