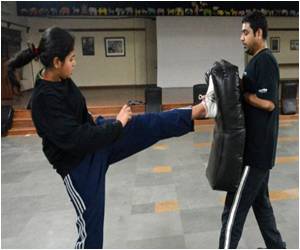 The event saw large number of people gathered in support for the cause to stop the rising crime against women.

Dramatic plays were enacted depicting the state of women across the country.


Dikshit, while speaking about women safety, said the police alone could not cater to the needs of the masses and participation from communities and societies to uphold the law was necessary.
Advertisement
"There are limits to maintaining law and order, where these limit are crossed we have society. Be it in the form of brother, a father or a mother. In whichever form we are members of the society it is also our responsibility to see why such incidents occur and for this reason 'awaz uthao' (raise your voice) campaign has been started and we hope to continue it," said Dikshit.

Women safety is a cause of major concern in our country as the number of crimes against women have only seen a steady increase in number over the last few years.

Rape, abduction murder and other such crimes against women have become common occurrences in the national capital.

The campaign aims at making the masses aware of the status of women in society and taking a unified stand to protect them.

"We will gather at Talkatora stadium on 8th March to spread the message that safety of women is the responsibility of the society and the government forces such as the police to make sure that woman in this country are safe," said Dikshit.

The recent months have seen horrifying cases of rape and murder in New Delhi, with brutal sexual assaults including that of a 23-year old physiotherapist, who was gang raped aboard a moving bus.

The Nirbhaya rape case made the news headlines across the globe.

Women in India face a multitude of threats, from illegal abortions of female foetuses due to a preference for sons, to the murders of brides by husbands and in-laws for want of dowry demands besides cases of child marriage and human trafficking.

Lately in the news for all wrong reasons India has been a mute spectator to raging incidents of sexual crimes against women and minor girls.

In many cases, violence against women has a level of social acceptability.

India has robust gender laws, but they are hardly enforced, partly because a feudal mindset is as prevalent among bureaucrats, magistrates and the police as it is elsewhere.

Politicians are also unwilling to crack down on customary biases against women for fear of losing conservative votes.