Pink noise has a flatter, more natural sound that resembles the soothing effects of wind, rushing water or falling rain, or a fan.


Previous research has shown memories in younger individuals are improved by acoustic stimulation during deep sleep, but this is the first study to show that older people also benefit from the effect.


‘Pink noise stimulation is an innovative, simple and safe non-medication approach for enhancing the sleep-dependent effects on memory in older adults.’

But beginning in middle age, the pattern of sleep changes and deep sleep declines substantially. This may also contributes to higher risk of cognitive decline including memory loss in older individuals.

The new study used sound stimulation that significantly enhanced deep sleep in older individuals and their scores on a memory test.

"This is an innovative, simple and safe non-medication approach that may help improve brain health," said Phyllis Zee, professor at Northwestern University in the US.

"This is a potential tool for enhancing memory in older populations and attenuating normal age-related memory decline," said Zee.

The study included 13 participants, who were over 60 years. Their sleep was tracked for two nights.

On one night the participants receiver acoustic stimulation and on the other night, they received sham stimulation.

During the sham stimulation the participants did not hear any noise during sleep.

For both sessions, the individuals took a memory test at night before bedtime and again the next morning.

The ability to recall in the morning improved in the sham stimulation group, the average improvement was three times larger after pink-noise stimulation.

The acoustic stimulation helped increase the degree of slow wave during sleep. This helped to improve the degree of memory, suggesting slow wave sleep remains important for memory, even in old age.

Using 'pink noise' could be a feasible intervention for longer-term use in the home.

The study was published in Frontiers in Human Neuroscience. 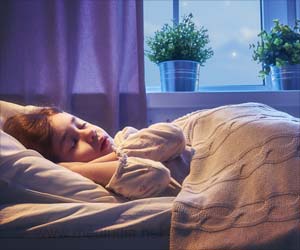